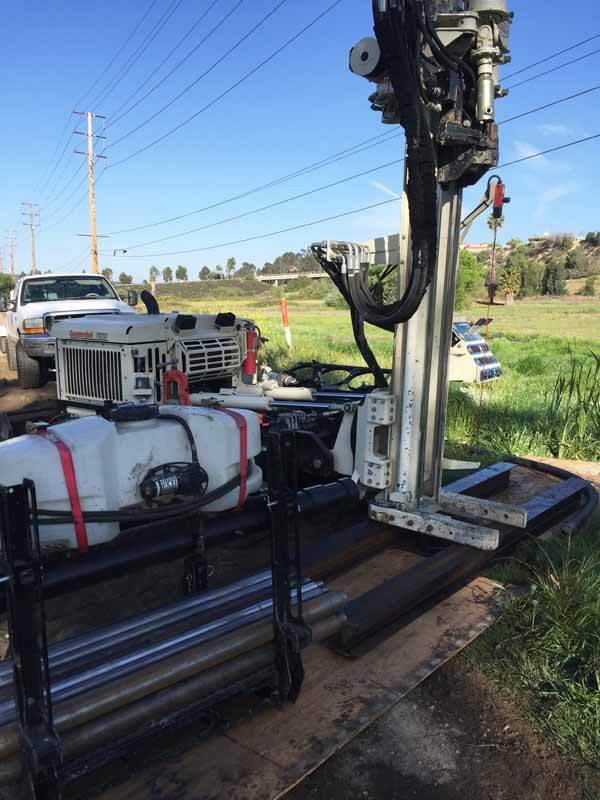 With ‘I’ beams and plywood sheeting for stabilization, the 7822DT is ready to plug one of several leaky abandoned CPT boreholes. One of the abandoned boreholes had grown up to 9-in. in diameter at the surface, and had a flow rate of about 6 gpm.

An artesian effect was causing a problem with an undeveloped site in California where several CPT boreholes, abandoned by another contractor, were leaking appreciable amounts of groundwater.

This area is known for containing a confined aquifer under pressure (artesian effect) at 30- to 45-ft. below ground surface.  Using the original CPT logs, CoreProbe International, in San Gabriel, CA, brought in their 7822DT to re-enter the same borings and pressure grout a minimum of 3 volumes under pressure at the saturated zone to plug the holes..

On the first day, CoreProbe measured, located, and staked the leaky boreholes in the north side of the site. They then dug channels to drain the work area, then calculated mixing quantities for a 5 percent bentonite and 95 percent Portland cement grout mixture. The 7822DT was used to drive 1.5-in. probe rods, with expendable points, to 35-ft. bgs, then mixed the grout. The expendable points were released, and a Geoprobe® GS1000 pressure grouted, bottom up, the leaky CPT location. The process was repeated at each borehole. The holes were allowed to sit a few days.

One of the abandoned CPT boreholes had grown up to 9 inches in diameter at the surface, and had a flow rate of about 6 gpm.

Before mobilization on the second day, the CoreProbe field team fabricated a 3.25-in. OD probe rod attachment to the high volume cement pump (pressure relief valve and pressure gauge) and brought in ‘I’ beams and plywood sheeting for stability.

Two truckloads of gravel were brought in to make sure the cement trucks, pump truck, and 7822DT did not sink! CoreProbe used the 7822DT blade to level the gravel in the only dirt road.

Only half loads of ready mix were used due to the heavy grout material that made the trucks top heavy, and to also prevent the trucks from sinking in the soft muddy dirt road. Water tanks were filled from the water producing borehole to use during the entire project. The ‘I’ beams and plywood sheeting were set in place to avoid sinking during rod retraction; then the field team was ready to roll.

The 7822DT was situated over the beams, then drove 3.25-in. rods to 42-ft bgs with an expendable drive point into the flowing borehole, hoping not to lose the points on the way down. A concrete contractor used a mix of 20 percent barite and 80 percent Portland cement grout to pressure grout, bottom up, as the rods were retracted, making sure enough product in the producing zone would plug the flow and allow the grout mixture to set. CoreProbe continued to grout the remainder linear footage of the boreholes, building sufficient pressure to close all piping cavities.

In addition, CoreProbe is going to pressure grout an old well that leaks in the south side of the property. This well was located via geophysical methods. A ramp will be used to avoid equipment sinking in the soft saturated ground around this well.  Stay tuned.... 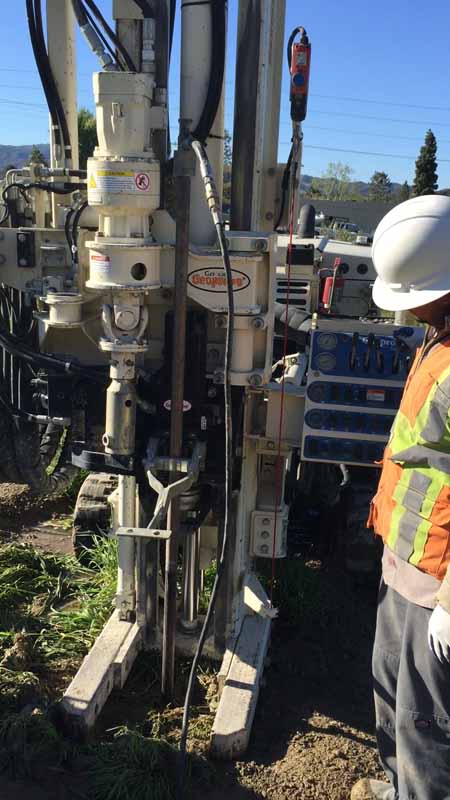 With ‘I’ beams and plywood sheeting for stabilization, the 7822DT is ready to plug one of several leaky abandoned CPT boreholes. One of the abandoned boreholes had grown up to 9-in. in diameter at the surface, and had a flow rate of about 6 gpm.

The grout mixture is pressure pumped through 1.5-in. rods using a Geoprobe® GS1000 grout machine.