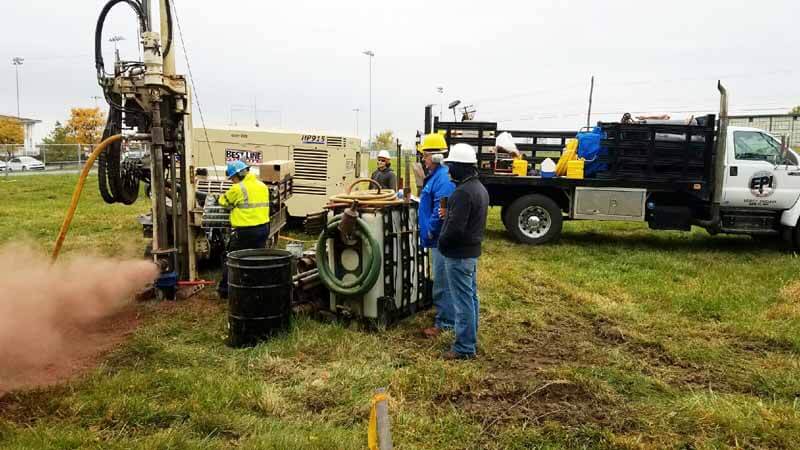 Dave Latimer, Driller with EPI, runs 6-in. air with a 7822DT to 85 feet based on water levels determined during the project.

Environmental Probing Investigations, in Cream Ridge, NJ, has been in the drilling business for 20-plus years. Although air and mud rotary work was not on their watch list while running smaller Georobe® machines, nor has mud or air rotary drilling been associated with a Geoprobe® 7822DT ... until companies, such as EPI, got the itch to try it out.

“We’ve been asked many times over the years if we can do air rotary, rock drilling, or mud drilling,” Tony Pressimone, Operations Manager for EPI said. “Up until August of 2016, we had always said ‘no’ to that work.”

With the purchase of a 5-in. air hammer and a 6-in. bit, we took on a project in Nazareth, PA, with our 7822DT to drill four wells to approximately 40 ft. bgs.  “We’ve always had the knowledge inhouse,” he said, “as most of our drillers have done this in the past working for other companies, but we had never tackled it with our 7822DT.”

EPI drilled with the Geoprobe® 7822DT using 6.25-in. hollow stem augers as the temporary casing. Once depth to bedrock was established, EPI switched to 6-in. air rotary to extend the well depth into the bedrock. When the depth to groundwater was determined, wells were then drilled to 40 ft. bgs, 58 ft. bgs, 34 ft. bgs, and 53 ft. bgs.  All holes were lined with 4-in. PVC, sand packed and grouted to surface, and finished with flush mounts.

Last November, EPI drilled with the 7822DT and grouted in 40 ft. of Schedule 80 PVC through 10.25-in. augers at a site in Jersey City, NJ. On the second day onsite, EPI set up the mud tub and drill rod, and started mixing mud. The field team used a 6-in. diameter drag bit to drill through the clay, organics and gravel layers encountered as they drilled to 65 ft. bgs to install a 2-in. monitoring well to 63 ft. bgs. The well was finished at surface with stick-up protective casing.

After doing several air/mud projects with a 2012 era 7822DT, EPI purchased another 7822DT to expand their air and mud rotary operations. “With the ease of set up, our knowledge, some ingenuity, and the purchase of a few options from Geoprobe Systems®,” Tony added, “both rigs are now operator friendly for doing a 10-ft. soil boring, or for drilling 6-in. air or mud rotary to 100-ft. bgs. 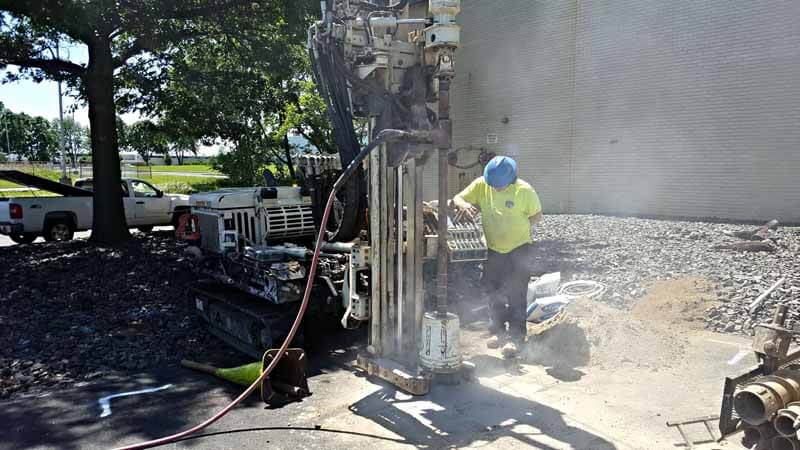 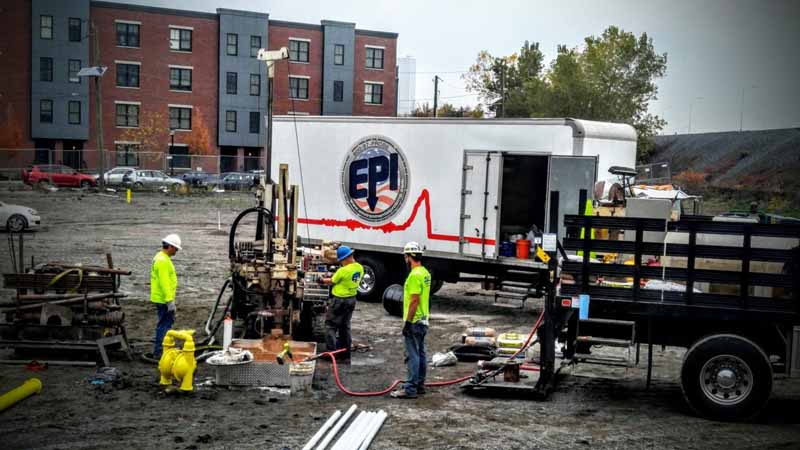 Dave Latimer, Driller with EPI, runs 6-in. air with a 7822DT to 85 feet based on water levels determined during the project.

EPI Driller, Dave Latimer, uses a 6-in. roller bit with air to chew through some tight overburden in the Philadelphia area. The 7822DT makes switching over to air easy and a pleasure to run.

Dave Latimer, Joe Abell, and Gary Decker use the EPI 7822DT to advance a 6-in. drag bit on their way to 65 ft. bgs to install a 2-in. PVC monitoring well with mud rotary.