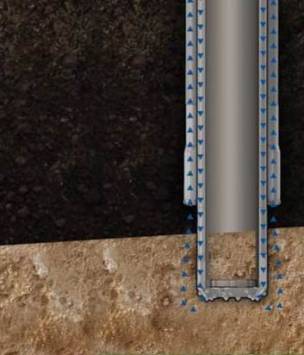 The Sonic Double Wall 45 (SDW45) System was created as a compliment to the conventional Sonic 4x6 system. It is a simple and effective tooling system designed to obtain critical confirmatory rock or bedrock samples at the end of a boring, whether Sonic 4x6 or SDT45 is used. “The beauty of this system is that it is a minimalist system. With very few additional parts, you have another tool at your disposal,” said Joel Christy, Geoprobe® Tools Engineer. There are no real limitations to this system as it can be used for environmental, geotechnical, mineral explorations, and most projects where 4x6 is used. It can also be used in place of traditional sonic dual tube system when angled drilling is required.

Conventional Sonic 4x6 systems perform well to reach bedrock. Once you make that switch to harder, consolidated formations, it changes the dynamics downhole significantly. When taking a confirmatory rock sample, water must be pumped through the inner casing to flush cuttings away from the drill bit. With Sonic 4x6, this water comes in direct contact with the sample core and dramatically reduces the ability to collect a confirmatory bedrock sample.

The SDW45 method allows the water to flow around the sample sheath and exit the water ports on the bit face, leaving the sample core unaffected. “This gives you a more representative sample than a coring casing method, especially in consolidated formations,” said Christy. One of the key benefits of this system is that conventional Sonic 4x6 can be used until you are ready to take a confirmatory rock sample. The outer 6-inch. casing can be left in place while the inner rod string is pulled. The SDW45 assembly is then lowered to the bottom of the casing using the same 4.5 inch rods. As the assembly is advanced, a confirmatory rock or bedrock sample can be taken in 5-foot or 10-foot increments (an optional liner can be utilized for 5-foot increments).