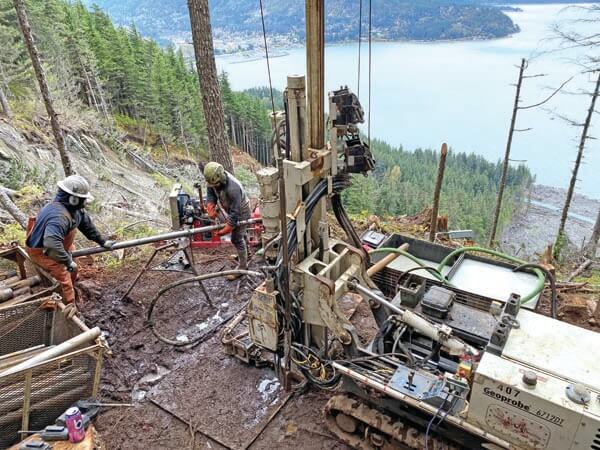 Operating adjacent to the landslide, the crew opens the inner tube from a 5-foot HQ rock core run collected more than 100-feet below ground surface. Core recovery has been routinely at or near 100 percent with the GA3100 4-speed rotary head on the 6712DT and mud program.

As a startup drilling company in 1984 using a baby blue Volkswagen Rabbit as a support “truck,” Kyle Brown, owner and president, served as the company’s driller, mechanic, and accountant for the first six years, building the foundation for the successful business that is Discovery Drilling today. Now you can find their drill rigs and more than 25 employees working in virtually every corner of Alaska. While their equipment fleet initially was comprised primarily of large, cumbersome rigs, early during the 2010 decade they began putting their Geoprobe® 6610DT and 66DT to work.

“We realized we had been drastically underestimating their capabilities,” DJ Wardwell, general manager, said. “Especially these machines’ ability to perform rotary work with augers. I think simply due to the smaller size of these drills, we didn’t think they would be able to suitably perform when doing auger work in the challenging Alaska geology.”

The more the company proved their previous assumptions wrong, it became apparent they needed to add a more modern Geoprobe® to their company fleet. Their realization coincided with the addition of the 6712DT to the Geoprobe® line of limited access rigs, including the 5410, 540MT, 420M and now the new 6011DT. Geoprobe® engineers specifically designed the 6712DT in three components for easy air lift to remote mountain tops or into cavernous structures.

“An Alaskan contractor who provides remote site support services purchased one of the first 6712DTs for a single helicopter-supported project at a remote gold mine with the intent of selling it at the end of the project,” Wardwell explained. “We came to a verbal agreement that in exchange for training his crew we would have first opportunity to buy the rig.”

Wardwell immediately fell in love with the machine, even having the opportunity to go to the mine and assist with the drilling and slinging of the machine with the helicopter.

“Compared to what we were using on helicopter projects, the 6712DT was an amazing platform for helicopter longline supported operations,” Wardwell said. “I couldn’t believe how easy the three sections came apart and went together. Even the helicopter pilots commented on its ease of assembly and disassembly.”

Surprised by the power and capabilities packed into such a relatively small drill rig, Discovery Drilling immediately purchased the rig at the conclusion of the mining project.

“Having the powerful percussion hammer, auger head for rotary work, automatic drop hammer for geotechnical soil sampling, and overhead winch all in a self-propelled, heli-portable drill rig has been a game changer for us,” Wardwell said. “And now the new 4-speed GA3100 rotary head has opened even more doors for our operations, as it can very efficiently run rock coring tools. We’re advancing HQ-sized rock coring tools upward of 150 feet into bedrock, all with a heli-portable drill rig.”

With the removal of six easy to access bolts and disconnection of a series of hydraulic quick connects, the 6712DT is ready to sling. Wardwell reports it takes only 15 minutes to reconnect everything once it arrives at its new site.

“On top of that, the fact it is a self-propelled machine has saved us expensive helicopter time compared to heli-base type platforms that need to be slung even if the next borehole is 5-feet away and accessible overland,” Wardwell said. “How to efficiently execute complicated scopes of work with a heli-portable drill rig used to be a real head-scratcher, but now we just default to the 6712DT, performing everything from auger work, air rotary, direct push, and rock coring applications.”

Currently Discovery Drilling has one of their four 6712DT units engaged in a large-scale project investigating a substantial landslide threatening a remote Alaskan community. Completely helicopter based, they are slinging the 6712DT to various locations around the slide area to collect subsurface data and install instrumentation.

“We’re primarily using HWT tools to advance through the overburden, and then switch to HQ-sized rock-coring tools to collect cores of the bedrock,” Wardwell said. “We’re running a full mud program and drilling to depths upward of 150 feet below grade. Ten years ago, no one here in Alaska would have envisioned us running HWT and HQ-sized core tools with what is essentially a limited-access drill rig, but the 6712DT with the 4-speed GA3100 rotary head really shines in this application.”

In addition to the 6712DT versatility, Wardwell appreciates that drillers on any level of the experience spectrum can meet or exceed client production expectations.

“The inherent safe nature of this drill rig makes it a great platform for up-and-coming drillers,” Wardwell said. “We keep purchasing them as demand for them keeps increasing. During our busy seasons, it’s rare to see these 6712DT rigs sitting around the shop. They are all out working.”

With at times six to seven Geoprobe® rigs in the field concurrently, Discovery Drilling has peace of mind knowing exceptional help and support is only a phone call away - whether it be for service issues, Direct Image® high resolution site characterization support, technical guidance, or tooling or repair part orders.

“When we call Geoprobe® with an issue, we are always treated with the utmost professionalism and a sense of urgency from the Geoprobe® team,” Wardwell said. “It’s a type of treatment we don’t always receive from other vendors. There is nothing worse than calling a vendor for support and being treated like some sort of burden. When we do call Geoprobe®, this is never the case.” 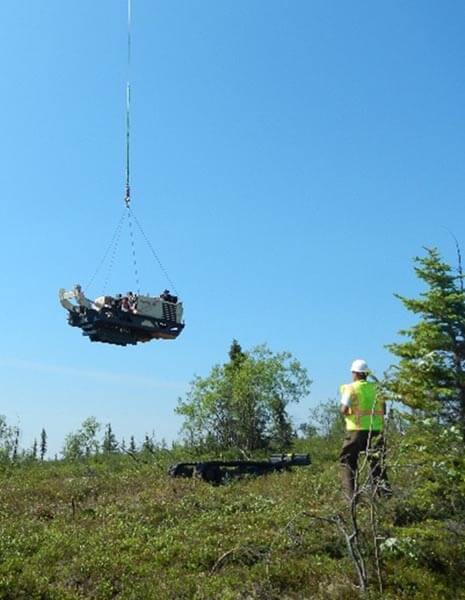 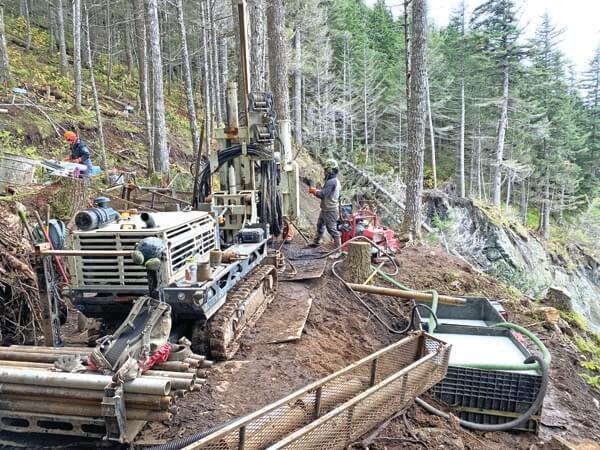 Operating adjacent to the landslide, the crew opens the inner tube from a 5-foot HQ rock core run collected more than 100-feet below ground surface. Core recovery has been routinely at or near 100 percent with the GA3100 4-speed rotary head on the 6712DT and mud program.

Engineered by Geoprobe® in three components, the 6712DT can be efficiently transported by helicopter to remote sites.

Crew conducts HQ rock coring using Geoprobe® 6712DT with the GA3100 4-speed rotary head. Without a water source near the drill sites, multiple mud tubs in a cascading format let rock fines settle out so water and mud can be recirculated, minimizing the amount required to be brought in by bucket on helicopter. 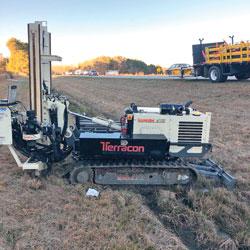 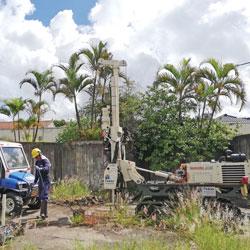 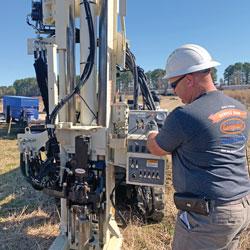 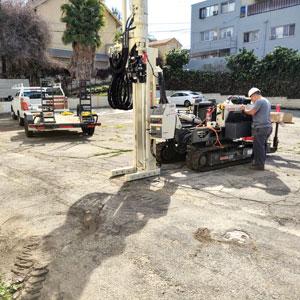 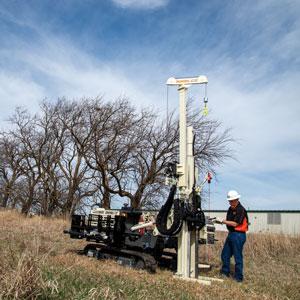