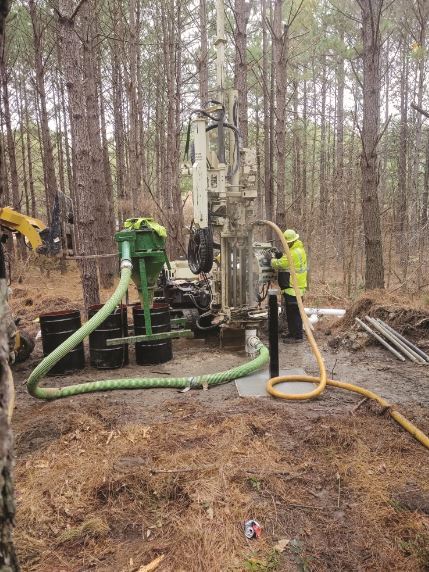 The ability to shift your scope of services raises resiliency to downturns in demand. Having a combination rig like the 7822DT provides the versatility to pivot in response to restrictions or economy without sacrificing power or production. Geo Lab Probing Services uses their 7822DT to even the playing ground dominated by conventional rigs.

Establishing a strong foothold in the direct push business, Geo Lab Probing Services got their start in 1996 as a sampling, on-site lab screening company using a probe in a van – which included their chemistry lab. Since then they’ve sought ways to stretch their capabilities.

“We purchased conventional drill rigs to broaden our scope of services beyond direct push, only to realize that 7822DT rigs are often preferred for conventional drilling tasks due to their efficiency and mobility,” Strickland said.

“The 7822DT is very efficient and outperforming conventional rigs head-to-head. It’s not cumbersome to complete 80 to 100 feet in a day. We’re not showing up as second best against a conventional rig,” Strickland said. “In a playground dominated by conventional drill rigs, we can come in and show them that Geoprobe® core rock. The efficiency gained allows us to do more linear footage and play ball with the big dogs, and we don’t have to concede on rates or production.”

“The Geoprobe® 7822DT does as much geotechnical work as our conventional rigs do,” Fore said. “It’s a stout rig with growing technology. It’s tough. There are no issues hammering or pulling DT45 steel. And the coring speed is just as fast as other rigs on the market.”

As their field of work has changed over time, Fore leverages the 7822DT’s ability to core rock. He’s run HQ casing to advance more than 160-feet into mine refuse and boulder fill while SPT sampling before continuing to rock core to 225 feet. He’s reached 247 feet below ground surface rock coring in Pennsylvania.

“We have the most overworked rigs, but we’ve had our second 7822DT for more than two years with no breakdowns,” Fore said.

Their ability to maneuver under trees, into tight alleys, and alongside drifting houses has allowed them to conduct more work and allowed their clients to become more creative with preliminary site investigations completed before demolition.

“They can see the feasibility of a project in a less intrusive manner before paying for building permits,” Wilson said.

“Most conventional rigs can’t perform low-clearance work under canopies and inside buildings with the nimbleness of a 7822DT,” Strickland said. “We have the ability to respond across the board. Name the project and we have a distinct advantage if we can find the unique tool to do it. We know we have the rig and the operator, which gives us more access and impresses customers.”

The ability to shift your scope of services raises resiliency to downturns in demand. Having a combination rig like the 7822DT provides the versatility to pivot in response to restrictions or economy without sacrificing power or production. Geo Lab Probing Services uses their 7822DT to even the playing ground dominated by conventional rigs.