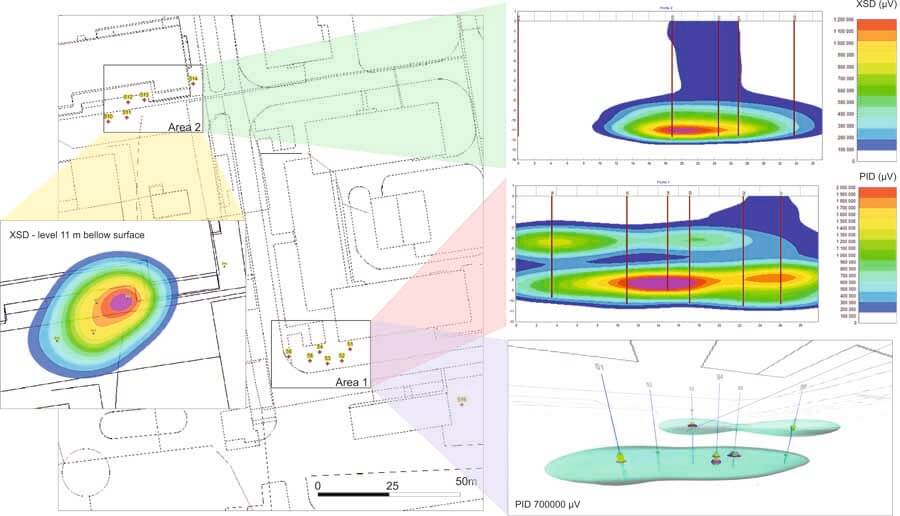 Visualization of the MIP detector signals (results from the Ejlskov Studio Pro software).

Dekonta company, a central/eastern European environmental company in Prague, completed both research and commercial activities at a site with complex contamination from a mixture of volatile organic compounds. Because the site was close to drinking water resources, the environmental risk was emphasized. The subsoil at the site is contaminated mainly by BTEX, mono-chlorobenzene (MCB), chlorinated ethenes (ClE), and drug residuals that are present in the soil and groundwater. The aquifer is shallow and well permeable, with the water table at 3- to 4-m below ground level.

At one of the most contaminated areas on the site, Dekonta used an MIP (membrane interface probe) system combined with core sampling in order to get information on distribution of the contaminants which were mainly BTEX and MCB. Another MIP investigation was performed in an area that was believed to be only slightly contaminated by ClE.

A Geoprobe® 7822DT and MIP system were used to complete the field work. The MIP system was set up with three detectors: a PID, FID, and XSD. MIP logs were used to determine locations for soil samples to be taken. The samples were evaluated and proved good correlation between the MIP logs and the lab data.

The obtained MIP data was processed using the Ejlskov Studio Pro software (provided by the Danish company EJLSKOV), which uses MIP data to model spatial distribution of the contamination expressed as detector response (Figure 1). The results showed good correlation between the soil samples and the MIP logs. Based on the data obtained, Dekonta documented that MIP can be used to monitor mixed contamination by BTEX and MCB. Investigators were able to determine the presence of BTEX and MCB by observing the PID and XSD signals. Both contaminates have a similar signal on the PID. The presence of MCB is indicated by an increase in XSD response.

The MIP investigation of the area contaminated by ClE discovered strong contamination, mainly between  9- to 11-m bgs in lower permeable formations. According to Jan Kakucka, Project Manager, at Dekonta, “This was an important finding because the depth of all historical monitoring wells within the area reached only to 8 meters bgs. Therefore, the extent of this contamination was unclear before. The pilot test results will help significantly in preparing the final remediation design of the whole contaminated site. We also plan further MIP investigation throughout the course of the remediation activities on the site.”

All the work was performed within the research project called PASSES, which focused on the utilization of innovative monitoring tools for a detailed characterization of contaminated sites. The pilot test ongoing at the site aims to assess in situ biodegradation potential of the contaminants. “Within the framework of the pilot test,” Jan added, “different methods of oxygen delivery into the aquifer will be tested, including direct push injection of three different oxygen-release compounds using Geoprobe® tooling.”

Activities at the pilot site were funded from the Norwegian Financial Mechanism 2009–2014, and by the Ministry of Education, Youth, and Sports in the Czech Republic.

Dekonta treats hundreds of thousands of tons of hazardous waste every year, and completes hundreds of environmental projects. They have offices in industrial centers of the Czech Republic, and provide services to Slovakia, Poland, Russia, Serbia, Montenegro, Romania, Turkey and China. 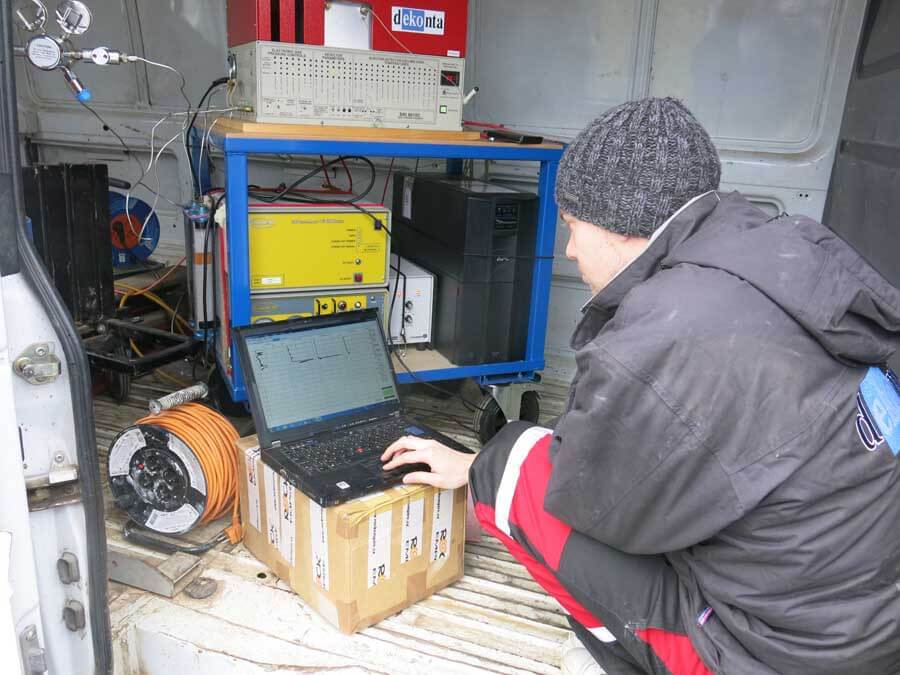 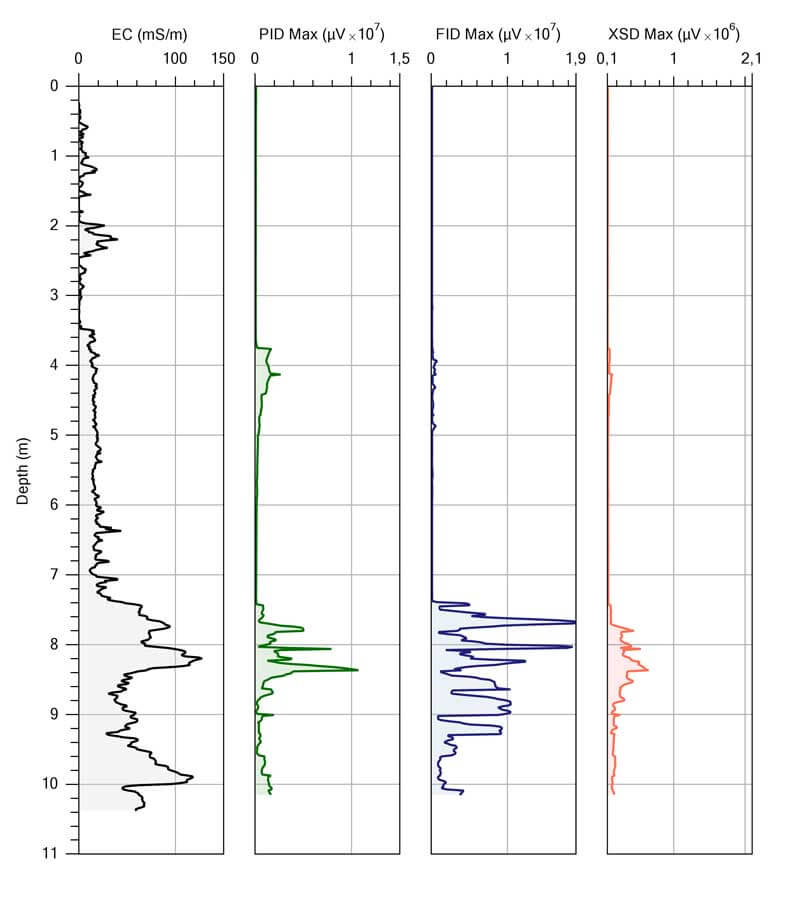 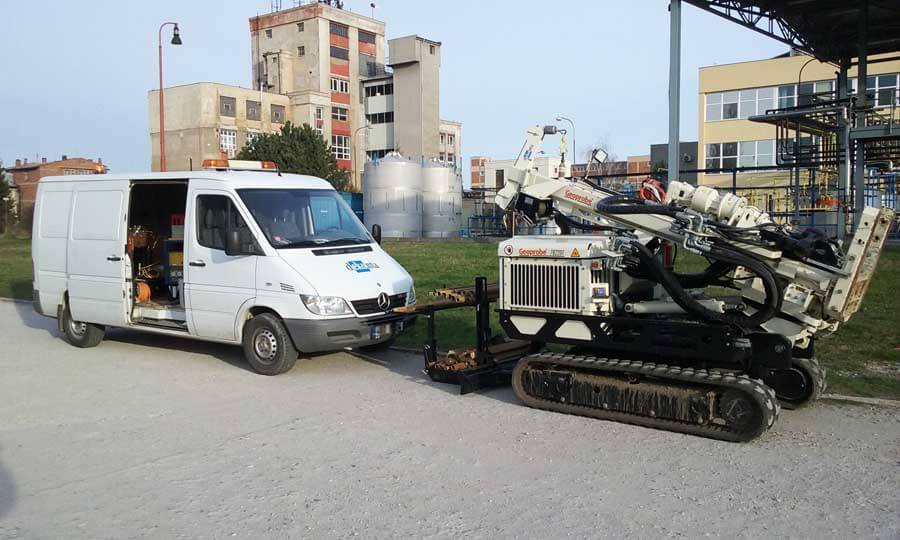 Visualization of the MIP detector signals (results from the Ejlskov Studio Pro software).

FIGURE 1. Example of MIP log from the site contaminated mainly by BTEX and monochlorobenzene (MCB). The PID signal shows residual contamination by BTEX around the groundwater (4 m bgs), and massive contamination of clay layers between 7.5 and 9.5 m bgs. The presence of MCB is confirmed by the signal from the XSD detector.

On site for the MIP investigation were Dekonta’s MIP support vehicle; a 7822DT was used to advance the MIP probe and collect soil samples.