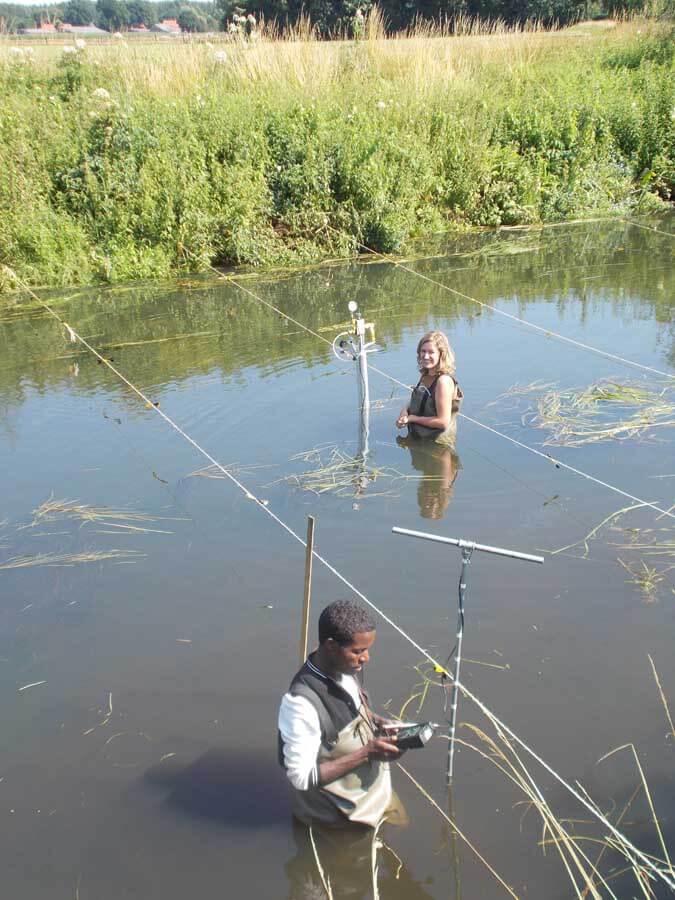 Students and a Professor from the Free University of Brussel (Vrije Universiteit Brussel) used a Geoprobe® Pneumatic Slug Test Kit to perform slug tests inside the Aa riverbed sediments, a typical lowland river in Belgium. The main objective of the field campaign was to characterize the heterogeneity of riverbed sediments. Slug tests are widely used to determine hydraulic conductivities of aquifers. However, the technique has not often been applied for the characterization of riverbeds. For this study we were looking for a fast and efficient way to perform a lot of slug tests on a relatively small area in the river. The campaign showed that the Pneumatic Slug Test Kit developed by Geoprobe Systems® is a reliable option for an efficient characterization of the hydraulic conductivity of riverbed sediments.

In total, 126 slug tests were performed at 83 different locations on a stretch of the river of about 20 m in length. At several locations, test were repeated to assess the repeatability reproducibility of the measurements. These tests showed that even in an unconventional environment such as the riverbed, reliable estimates of hydraulic conductivity can be obtained with the Pneumatic Slug Test Kit. Results showed that riverbed hydraulic conductivity varied over several orders of magnitude with the highest calculated value (18.3m/day or ~2.1E-3cm/sec) being more than 200 times larger than the lowest calculated value (0.08m/day or ~ 9.3E-5cm/sec). Moreover, patterns of riverbed conductivity were identified with higher values in the middle of the river compared to the sides.

Pneumatic slug tests were completed in a controlled procedure. The pneumatic manifold was installed on mini-piezometers (33.7 mm OD) which were manually driven into the riverbed sediment. These piezometers consisted of a 20 cm well screen (0.65 mm slot size) welded to a drive point at the lower end and a stainless steel pipe at the upper end. The slug test was initiated by pressurization of the piezometer with a hand pump, forcing water levels down. Once water level was stable, the release valve was opened, instantaneously releasing the air pressure. The recovery of hydraulic head to its static level was recorded with a small-diameter pressure transducer. Hydraulic heads were monitored on a laptop in real time with the Geoprobe® Slug Test Acquisition Software. This way the quality of the measurements could be assessed in real time. Based on the recovery curves, riverbed conductivities were calculated with the Bouwer & Rice (1976) method.

In short, the Pneumatic Slug Test Kit was proven to be efficient for a reliable characterization of riverbed heterogeneity and small-scale spatial variability. This is why the Department of Hydrology and Hydraulic Engineering decided to order a second PST kit for their future field measurement campaigns.

Wes McCall, Geologist at Geoprobe Systems®, noted the researchers at VUB used piezometers they designed for the project. The SP16 Groundwater Sampler is often used for slug testing discrete intervals in many unconsolidated formations, similar to the work done at the University. 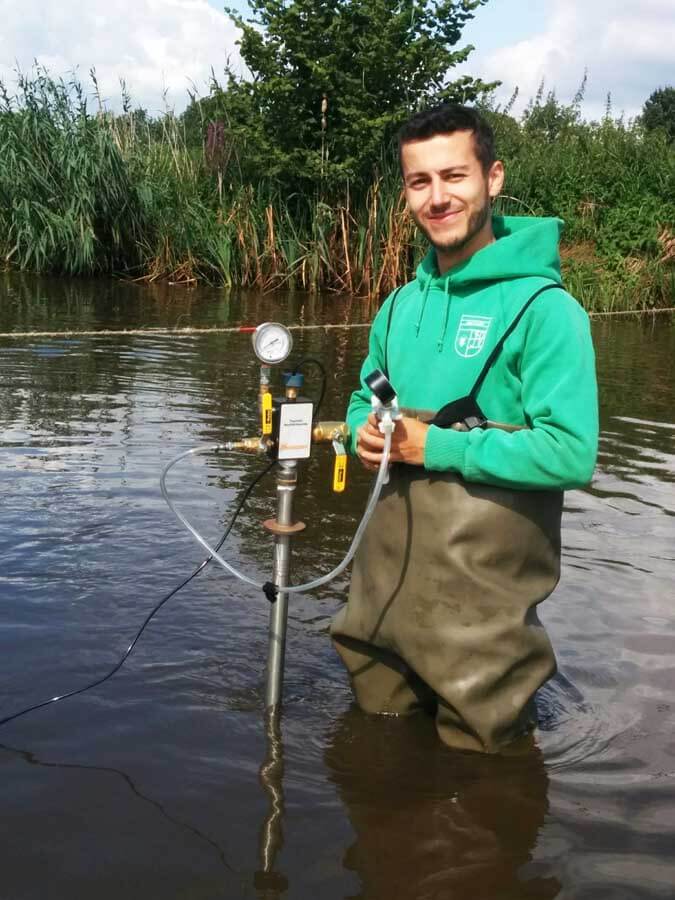 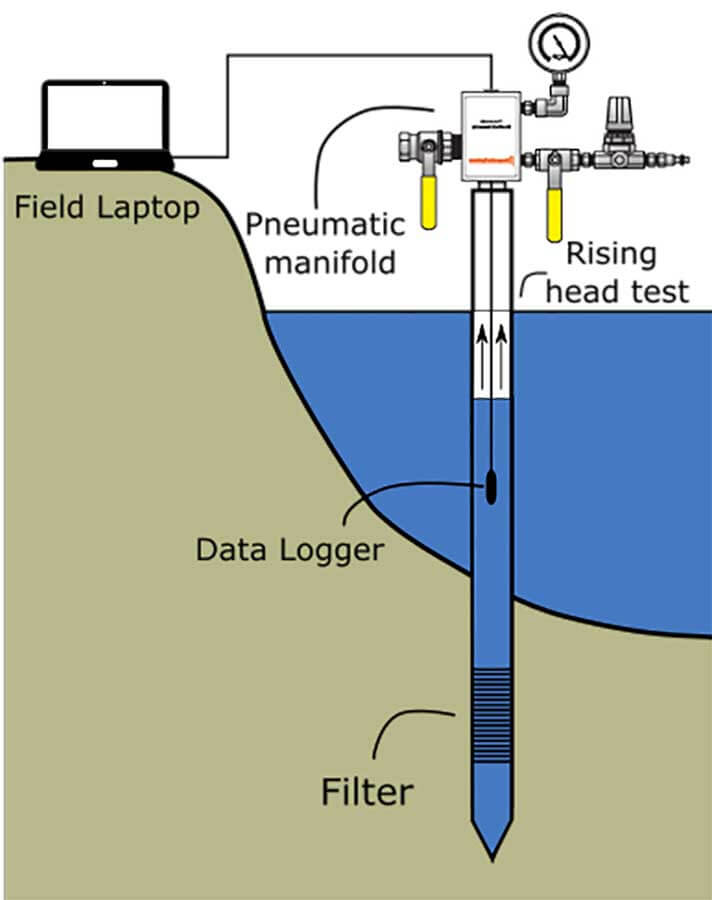 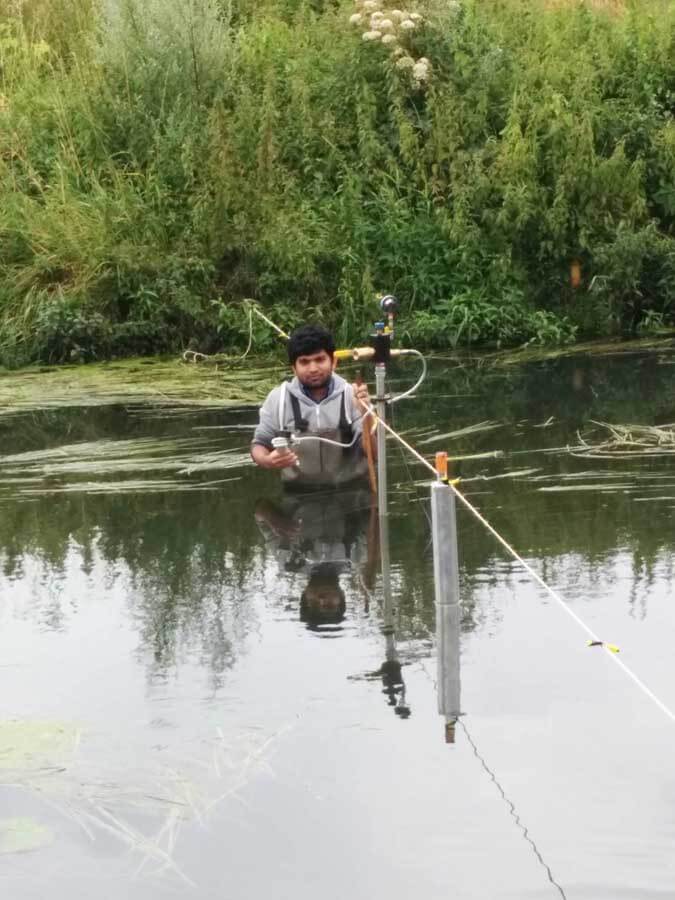 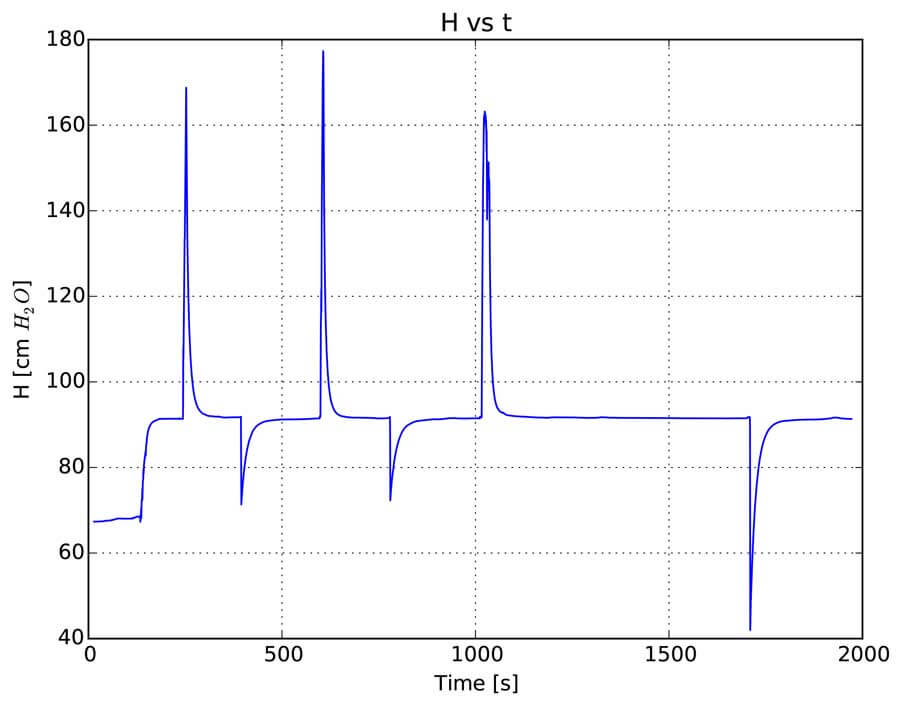 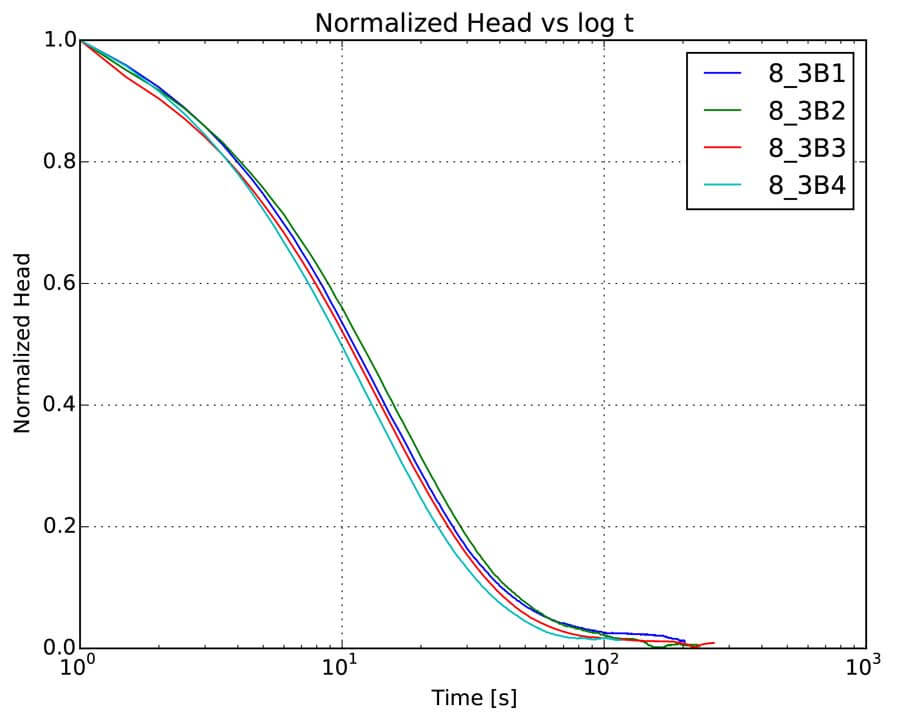 Gert Ghysels, PhD. student at the Department of Hydrology and Hydraulic Engineering at Vrije Universiteit Brussel.

Graphical presentation of the Pneumatic Slug Test setup showing the combination of a mini-piezometer and pneumatic manifold connected to a field laptop to monitor measurements in real time.

Plot of hydraulic head versus time for three repeating slug tests at the same location with different initial head displacements.

Normalized head versus logarithm of time show that the repeating tests give similar test responses, indicating that conventional slug test theory is applicable at this location.