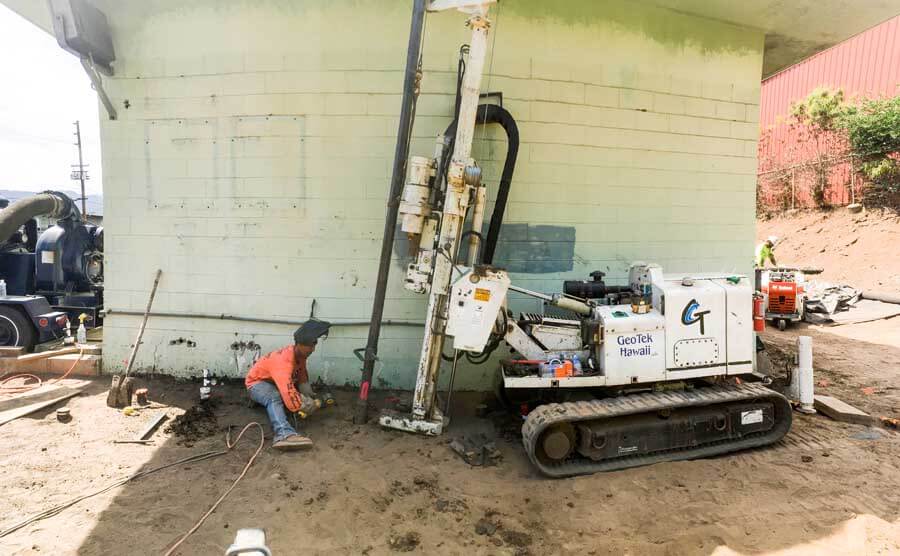 Drayko welds two sections of pipe together under the overhang of a pump station. The maneuverability of the 6620DT permitted a battered installation under the buried sewer main to ensure a ‘solid’ frozen curtain.

GeoTek Hawaii was recently retained by Drayko Construction in Honolulu, HI, to complete an innovative project for the City and County of Honolulu. The City had an 18-in. diameter pressure sewer main elbow that required replacement. What made this particular work difficult was its location. According to Quinton Wilson, Operations Manager for GeoTek Hawaii, “The sewer main was wedged between the pump station foundation and Oahu’s main fuel supply pipeline corridor,” he said. “Not only was its proximity to multiple utility infrastructures difficult to work around, but it was also located approximately four feet below groundwater.” Regular excavation and shoring was not an option.

Drayko proposed a common construction technology, but something that wasn’t common for the tropical paradise of Hawaii ... freezing the ground.

Drayko needed 31 freeze pipe conduits installed in a very strategic layout with precise placement next to the pump station foundation and the pipeline corridor to ensure success. Installation of 30-foot-long, 3-inch diameter steel pipes in a circumference around the elbow was engineered on paper to be the solution.

Those involved in the placement design turned to GeoTek to turn engineered plans into reality. A site visit revealed that GeoTek could perform where others could not. “Drayko was surprised when I told them that we could drill their pattern without removing the fencing and also get under the overhang,” Quinton said. Both of which were compromises Drayko was willing to concede under requirements from another contractor. “They were quite thrilled and even a bit skeptical when I told them we could do it,” he added.

GeoTek Hawaii relied on their Geoprobe® 6620DT to use solid stem augers to drill the holes and install the conduits. A modified overhead winch mast served dual purposes. A bolt-on extension allowed the hoisting of a single 30-foot-long pipe for installation, and also was removable for seven of the installations under a 15-foot high overhang next to the pump station.

Since each freeze pipe had a limited radius of influence, placement in X, Y, and Z axis were critical for success. “Boreholes had to be in exact locations and installed within 1 degree of plumb,” Quinton explained. The adaptability of the 6620DT allowed in the field flexibility as the field engineer required an additional battered pipe to freeze the ground under the sewer main. GeoTek’s skill at implementing a simple drilling technique replaced more expensive approaches. Discussions with the field engineer resulted in compliments on GeoTek’s performance with such simple machines and tools.

“GeoTek Hawaii successfully pulled off the exact placement of the battered freeze pipe directly under the force main, and installed it at exactly 82-degrees to ensure a solid freeze curtain for the excavation,” he added.

All groups involved were under close scrutiny to prove the ground freezing technique in Hawaii. Each group deemed this a successful project from their respective points of view. 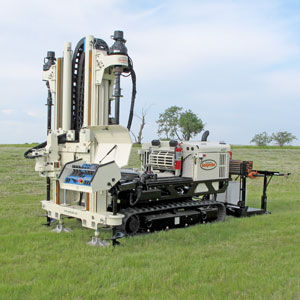 Complete CPT logging or use percussion hammer to advance soil and groundwater sampling systems with convenience of track-mounted 6622CPT. 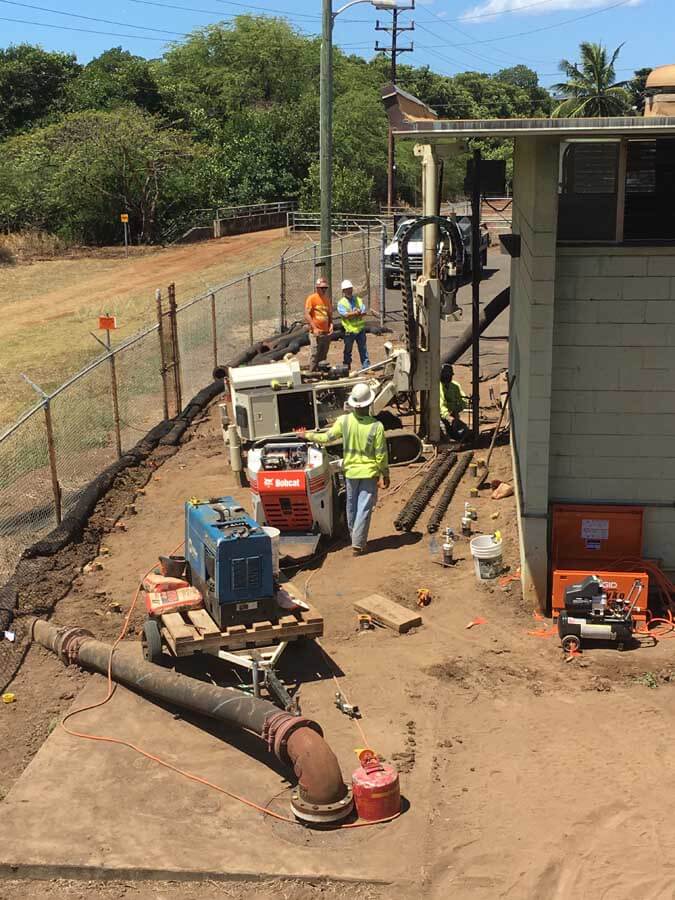 Drayko welds two sections of pipe together under the overhang of a pump station. The maneuverability of the 6620DT permitted a battered installation under the buried sewer main to ensure a ‘solid’ frozen curtain.

GeoTek was selected for the work because the 6620DT allowed pipe installation under the overhang and without the removal of the fence. Neither criteria could be met by competitors who don’t own Geoprobe® equipment. The installation layout can be seen encompassing the equipment.