The Bikes on Broadway 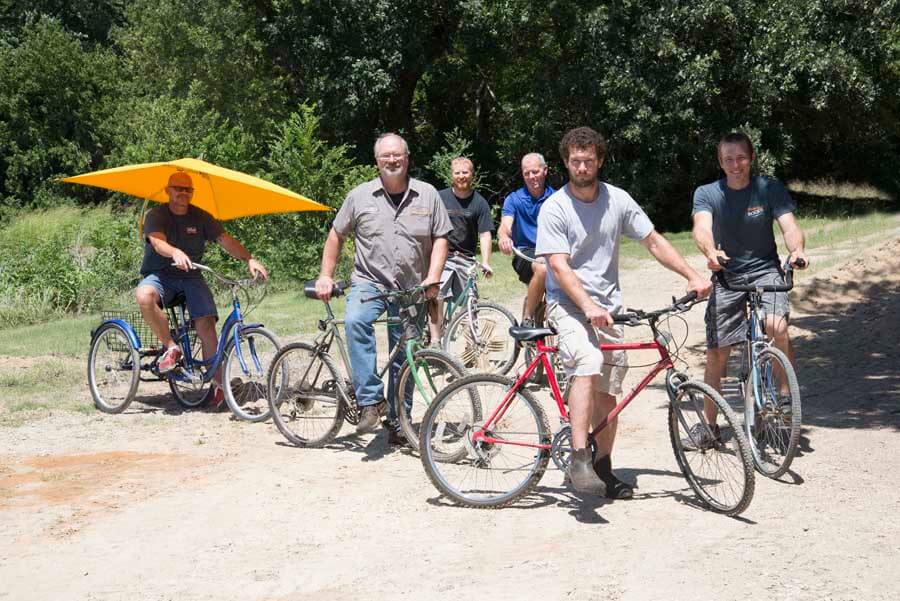 The Bike Pack. (l to r) Dave Golden, Tim Androes, Jed Davis, Mike Carlin, Dustin Fross and Kyle Riedel. Wal-Mart bikes are too fancy for these guys. They prefer cast asides. Alley treasures. Hand-me-downs. Junk. Getting stranded is a legitimate concern, especially if they’re loaded down with heavy tooling. Cell phones are a necessity when on the bikes!

Ever present on the North Campus of Geoprobe Systems® (located on Broadway Blvd) but seldom seen by the public, these men and their ‘machines’ ride silently through the daylight hours as almost-legendary examples of the company’s stance on cost efficiency, fuel savings, and innovation. Take a look behind-the-scenes at this carefully guarded company secret that only co-workers and customers coming to Kansas have witnessed.

A conversation with the Broadway Bikers.

We like to think we’re being resourceful while reducing our carbon footprint! Plus, junk bikes are just funny. Each is better than the last one we had. We started really modest ... with real junk. Now we’ve got GOOD junk!

Riding really took hold when the Beach Cruiser came to be. The Cruiser was the turning point for the whole bike movement! It’s ergonomically correct, comfortable, fast. Like being in a La-Z-Boy®. You could nap on that thing! That’s when we realized life was good with the bicycles around here. Once we got the ‘cool’ bikes, everybody wanted to ride them!

When we have demos going on across the street, and one of us rides a bike over to deliver a part, especially with the El Camino and we’re wobbling and trying not to fall over, the customers’ attention becomes focused on us! Especially when we’re carrying like 70 lb. worth of parts. It’s a real conversation starter for sure! It may not be cool, but it’s unique!

We have multiple buildings at our facility so the bikes serve a real purpose. We can ride a bike to the SAW Shop with raw material, get the part sawed, then ride directly up to the lathe. Unload it and machine what we need, load it back on the bike, ride it back to R&D, and get it ready for customers. You can also fit a cooler with ice, a 2 lb bag of Gardetto’s, and peanut M&M’s in the basket of the Trike! But with the Cruiser, whatever you take has to fit in your back pocket, but it’s a comfortable ride!

Voted best user of a bike by the Bikers: Kyle Riedel! He used a bike while testing sonic weighted wireline tooling. We were testing a 400-ft. hole. Normally, the soft tape measure used would take forever to pull out by hand. So Kyle hooked it up to the back of the El Camino and rode off to pull the tape out of the hole! One guy stood at the hole to make sure the tape didn’t get caught. Kyle would rewind the tape back on the reel while the others back at the hole would start drilling again. It sure sped up the process, and it worked pretty good!

When it’s clean-up day at the shops, it’s also time to spruce up the fleet! Sometimes we have to reslime them, repair flats, and also add more flare if somebody finds something cool along the road!

Not all garage sale finds are worthy to fit in to the fleet. Someone brought in a Trek bike with a basket on it. It didn’t drive well plus you couldn’t fit a dead squirrel in the basket!  The Trek is no longer in the rotation.

That’s their story and their sticking to it. Stop by and check them out when you’re in the area! 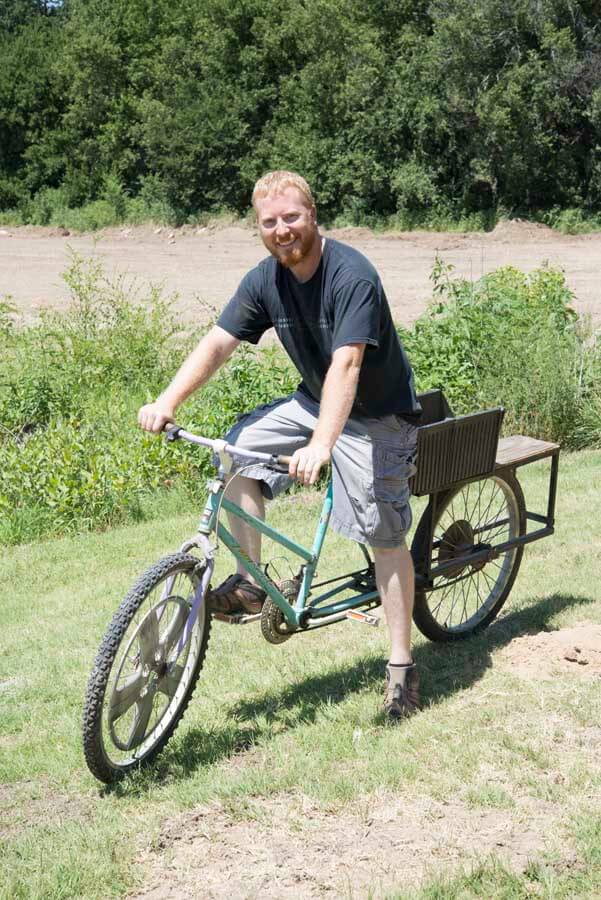 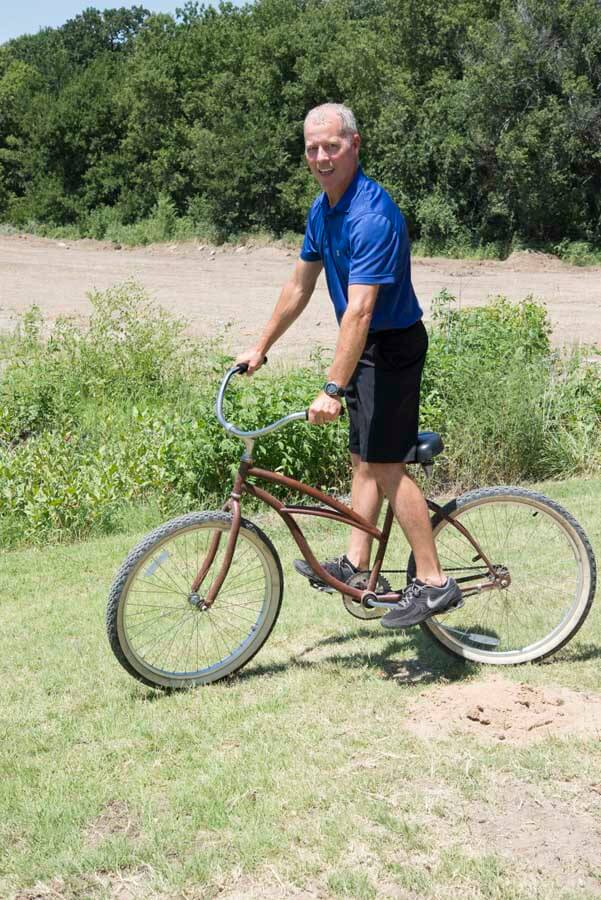 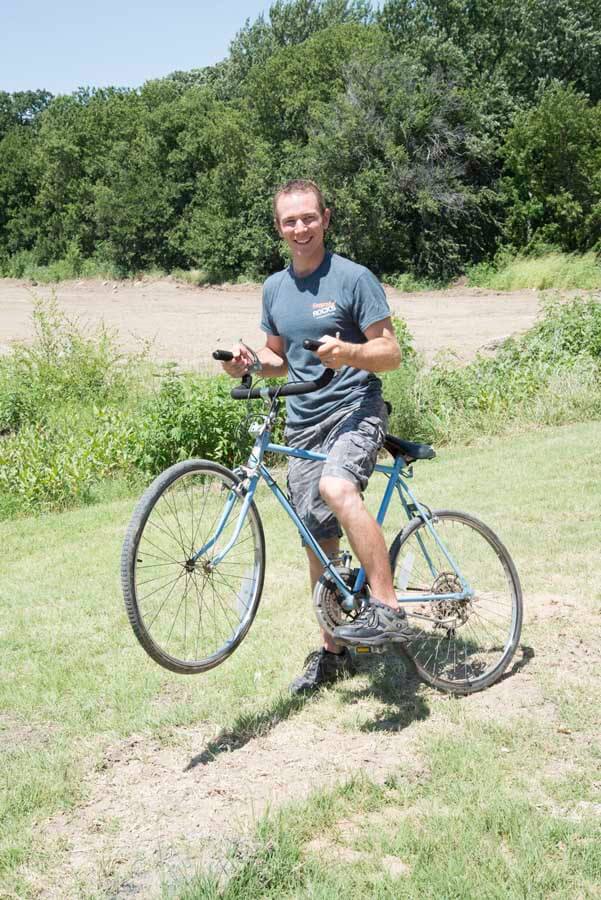 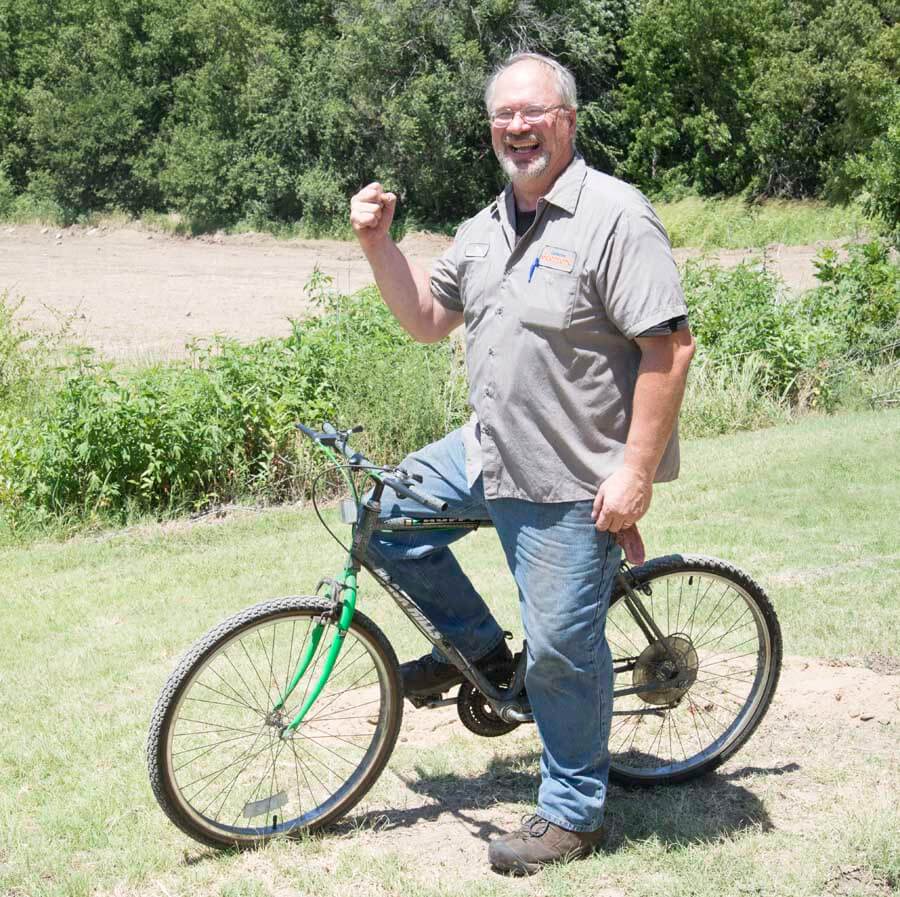 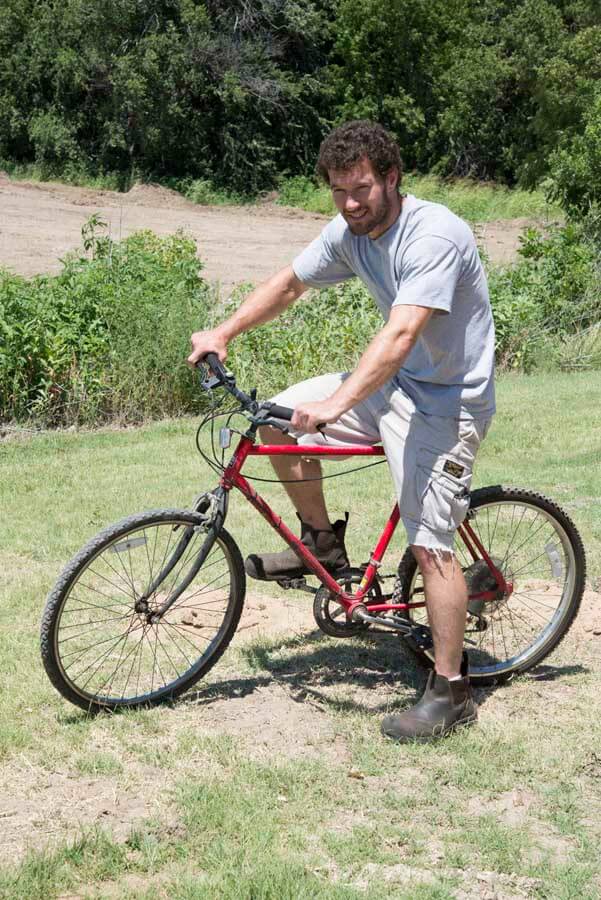 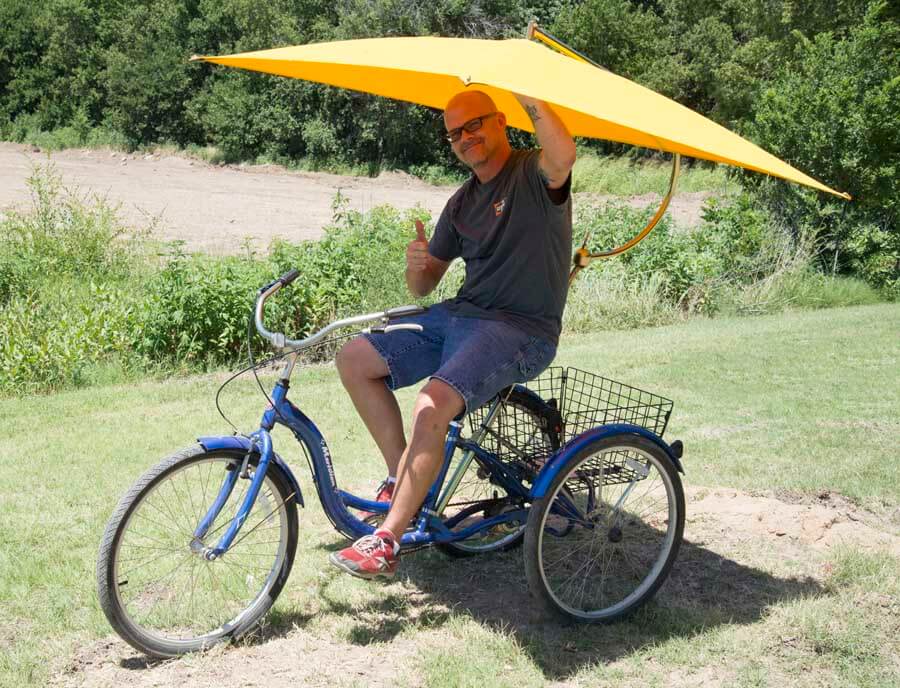 The Bike Pack. (l to r) Dave Golden, Tim Androes, Jed Davis, Mike Carlin, Dustin Fross and Kyle Riedel. Wal-Mart bikes are too fancy for these guys. They prefer cast asides. Alley treasures. Hand-me-downs. Junk. Getting stranded is a legitimate concern, especially if they’re loaded down with heavy tooling. Cell phones are a necessity when on the bikes!

Name: El Camino aka Long Bike - Jed Davis ... Tools Design Engineer - Unique feature: one brake, thus the nickname, Man-Killer! Came from one of Tom Christy’s missionary friends.Slightly modified with cut-out car hub cap (found along Broadway) and long bed for hauling larger tooling. No kick stand so a bit clumsy to park but can haul over 100 lb of tooling. Has been on campus at least 15 years.

Name: The Beach Cruiser - Mike Carlin ... Tools Group Leader - Previously pink (Urban Lady) with straw basket. Pink was over-rated. Sand blasted it, tore it down to nothing. Ran it through paint then blasted it and treated it with Mercuric acid and added salt from the upstairs breakroom to make it rust ... like a Rat Rod! Corrosives made it sweet, then clear-coated it. Gold chain for pop. Removed chain guard for more flair.

Name: Tim’s Bike - Tim Androes ... SAW Shop Supervisor - Transplanted from Tim’s house after realizing he could save time and shoe leather by riding it back and forth from the many Broadway locations. If he moves to another building, the bike moves with him!

Name: Dustin’s Bike - Dustin Fross ... Plasma Press Brake Operator - Hand-me-down from R&D because of bent handle bars. “A bike that wasn’t good enough for them anymore because of the new fancy bikes they acquired!” Sleek red paint job and electrical tape holding the grips on. Used to deliver parts to the shop and to nearby buildings on campus.

Name: The Trike - Dave Golden ... Tools Group Draftsman - Couldn’t Pass up a used trike ... with a basket ... and it’s a Schwinn! “When we ride the Trike we get to relive our childhood!” THE bike of choice for heavy parts or hauling large casing, such as 80 lb. 2-ft. long 10-in. casing. Has also carried an entire set of fixturing for lift cap destruction testing (200 lb.) while pulling a trailer (needed a push to get started, but made the trip!) Kansas summers get pretty hot so the umbrella is a bonus.

Mike Carlin on The Trike.