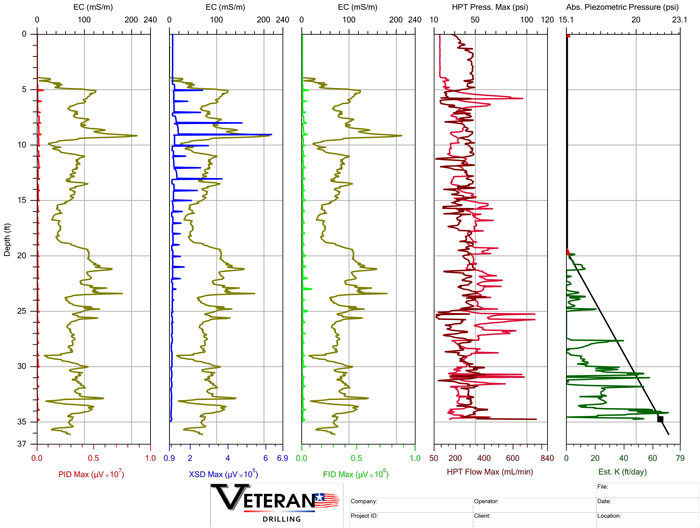 At 18, Frank Stolfi joined the marines as a helicopter gunner on a CH46, learning everything about flying and repairing a helicopter.

Through two deployments — to the Middle East and to Somalia — Stolfi also learned he can go further than his initial instincts.

“I never tell myself I can’t do or learn something. I went back to college in my mid-30s for computer programming with four kids, going to school at night,” Stolfi said. “Everything you do in life is a learning opportunity. You should never feel something is too minimal for you.”

As he was finishing his stint in the Marines, Stolfi’s staff sargeant asked if he wanted a job, launching his drilling career in 1996. Within 10 years he was building the company’s high resolution site characterization program using Membrane Interface Probe (MIP)  doing presentations and corings, which snowballed into doing lots of MIP out of the Maryland, Colorado, and California offices. After 20 years, the company was purchased and rather than stay with a larger organization, he moved to a different company. Two years later this second drilling company was purchased by a larger corporation.

“I didn’t like the increased corporate culture of the company,” Stolfi said. “My wife and I were going to leave California, but I wanted to try and build by own company. So in November 2019 I started Veteran Drilling, beginning fieldwork in April 2020.”

Leaning on the can-do lessons of his Marine training and the small-company culture he cherished during his first drilling job, Stolfi focuses on his biggest asset — his employees Randy Lopez, Bruce Ashmore, and his son Frankie Stolfi.

“You need quality people willing to wake up at 4 a.m. and put in 12-13 hour days,” Stolfi said. “I’m going to take care of a handful of guys who go above and beyond to build a company. I want it to be ‘our’ company and be a job they enjoy and feel like they have skin in the game. Clients can see when a guy enjoys the work. With employees, if you take care of them, they’ll take care of you.”

“Looking at the industry, you can make a lot of money being diverse with your technologies. You can also go through a lot of money and run into problems of having capital to grow,” Stolfi said. “I’m going to focus on one aspect so when people in California think high resolution they think of us.”

Collecting the data, Stolfi develops a model to show clients how and where the contamination is moving. He tries to help clients understand the advantages of high resolution site characterization logging and finds during the past two decades it has become more accepted.

“Clients now have a better understanding of what high resolution data can provide, so they’re more willing to expand their approach to data collection in order to save money on remediation. Ultimately, regulators drive the industry and are now strongly encouraging in situ testing,” Stolfi said. “Clients are willing to pay for a guy with a lot of understanding of technology working with them as a team versus as a vendor. I can provide insight from extensive experience.”

In an industry that started data collection by auger sampling every five feet, using the Geoprobe® suite of Direct Image® tools he efficiently collects continuous data without cuttings to gain a thorough understanding of the subsurface.

To be the most value to his clients and relying on his personal drive to keep looking forward, Stolfi uses Geoprobe® Direct Image® combination logging tools like CPT with MiHPT to efficiently gather the most pertinent information.

On a job in Anaheim, California, they pushed MIP to 100-foot plus to identify a small transmissive zone — just a couple of feet – where contamination was migrating through.

“MIP found exactly where the contamination was coming from. We could do a handful of probes to determine where contamination may be, then can do a strategic approach to soil and groundwater sampling to determine how much is there,” Stolfi said. “MIP identifies the target area versus guessing where it might be. It’s changed the industry and how sites are assessed. Clients may have no idea where the trickle of TCE they’re still getting in the well is coming from or may kind of know. MIP really helps narrow down where.”

“The client liked the idea of technology but because of coarse, homogeneous material was concerned about cross contamination,” Stolfi said. “Using the profiler continuously presented no risk of cross contamination versus interval samples and provided a really good representation of the groundwater.”

As Stolfi continues building his high resolution site characterization business, he relies on Geoprobe® Direct Image® tooling to collect the high density of data because “they are the best at what they do.” He credits Geoprobe® for fewer problems and less downtime during the past 15 years, which means more productivity for his start-up.

“I’m in business to have a good life and enjoy where I work,” Stolfi said. “Hopefully in the future I can hire more veterans. We’re definitely a different breed, especially Marines. I want to give them somewhere they can work, where they can be themselves and don’t have to feel pressure to be perfect.”