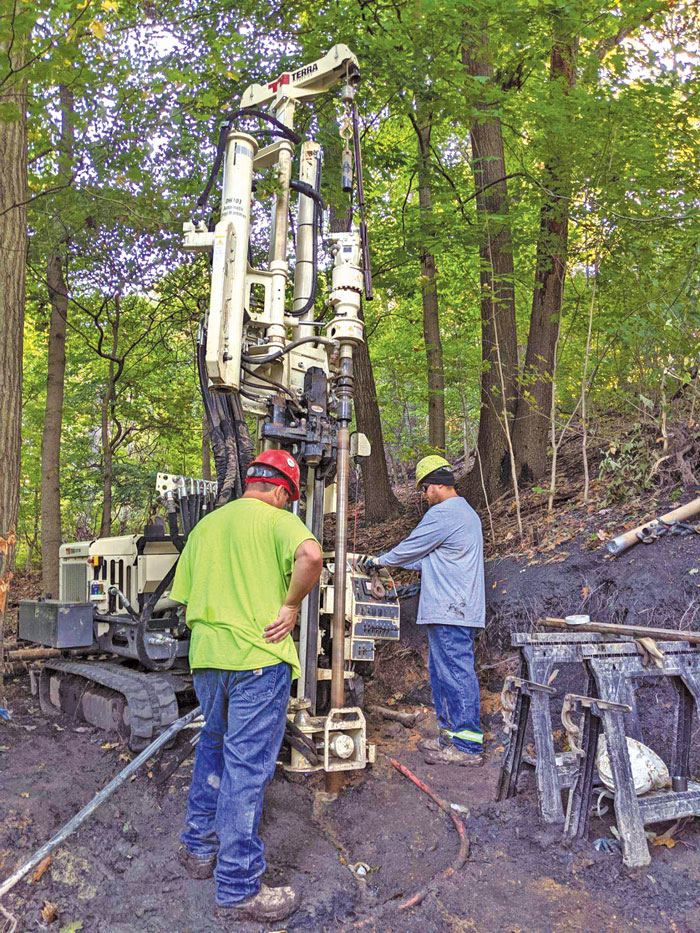 Accustomed to running their auger rigs with after-market hammers, geotechnical and environmental drilling company Terra Testing, in southwest Pennsylvania, wanted to take a deeper dive into the direct push market. While their primary purpose for a new machine was direct push sampling, they were also interested in using the rig for auguring, coring, air rotary, down the hole hammer, and SPT sampling.

“We sat down to talk with Geoprobe® and they knew exactly what we were looking for,” Eric Hajek, president, said. “Our main focus once we received the 7822DT was to learn all the direct push tooling and methods and market that to our customers.”

To ensure they understood the drill, tooling, and capabilities, Vic Rotonda, regional sales representative, came to their facility for a walk through with drillers and staff.

“Vic spent extra time with our new driller who was put in charge of running this drill. Vic gave him his cell phone number and said ‘call anytime with any questions or if you need help’,” Hajek said. “Our driller and I are very appreciative of the time Geoprobe® has spent with us on the machine.”

Their first direct push projects went smoothly and a lot more quickly than with their other direct push tooling.

“The hydraulics when using after-market hammers on auger rigs aren’t made to run at the same time, taking away from the feed pressure. You’re always having to finesse things throughout the day,” Hajek said. “Geoprobe® has all the pressure you need, which makes it more convenient, and results in more power and better samples in stiffer materials.”

With a backlog of geotech projects building up, they tried out the 7822DT and discovered a ton of advantages in the geotechnical market as well.

“The fifth is the most important. The driller we put on it had never drilled on anything, and I attribute his success to starting out on the Geoprobe®,” Hajek said. “It’s a very comfortable machine for new drillers to learn on."

Encountering rock on nearly every job, the 7822DT has done NWL wireline core to 250 feet as well as completed HWL and casing advances.

“Every project we use it on we hit shallow rock, so coring on everything,” Hajek said. “The set up for coring is easy.”

So while the purpose of purchasing the rig was to get a better grasp on the direct push market, what they found is they use it for about 85 percent rotary geotech and 15 percent environmental direct push.

“The 7822DT just kept showing us all the other advantages it has in addition to direct push drilling,” Hajek said. “The 7822DT gives us more capabilities so we can take on more slope drilling and get inside buildings, meaning we have more areas we can get into to work. It’s made us the go-to, one-stop shop company. It does 90 percent of our work other than sonic.”

Hajek concedes he — and he’s sure others — only ever thought of Geoprobe® for direct push, not as a geotech drill. He also admits he’s been proven wrong.

“I, and others, always believed Geoprobe® is for probe holes, you don’t need it for anything else. But Geoprobe® really does everything else — people just need to open their eyes to it,” Hajek said. “They’re the leader in innovation, putting more stuff on their drills than the competition. From all the different drilling capabilities to how easy it is to teach a new driller to become a good, safe, and productive driller, I am anxious to see all the advancements Geoprobe® makes in the future and look forward to working with them in the years to come.”