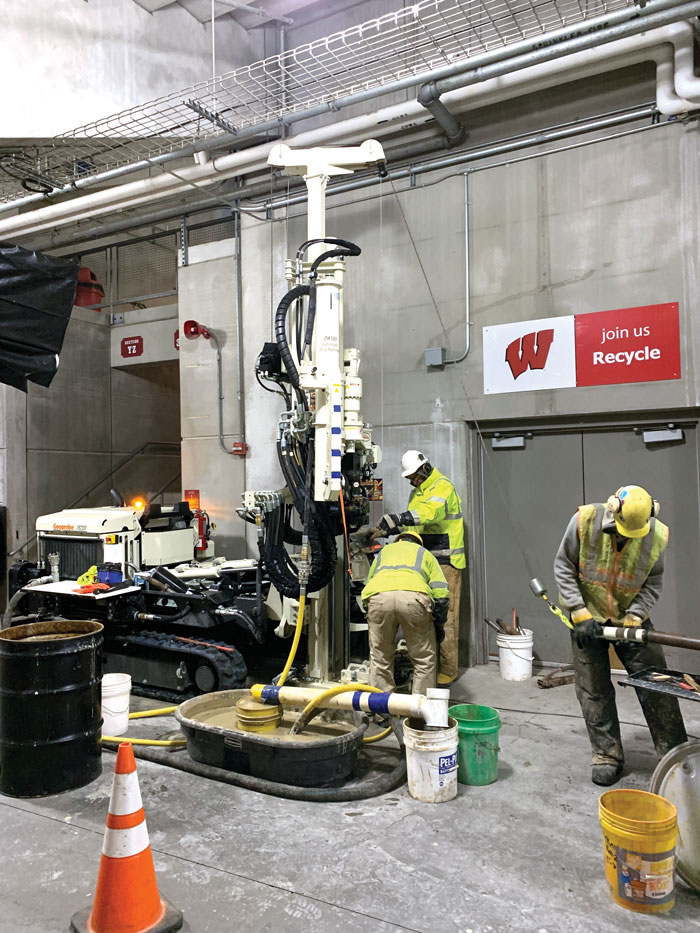 Started by Earl Reichel 55 years ago, Soils & Engineering Services Inc. bought their first auger drilling rig in 1968 to provide drilling as part of their geotechnical engineering. As the drilling division expanded, they added environmental sampling to the services they provided others.

“During 1980s when environmental sampling was booming in Wisconsin due to state requirements for gas stations to upgrade their underground storage tanks, we used a hydraulic hammer on our auger rigs for direct push sampling,” Duane Reichel, owner, said. “All along I followed the progress of Geoprobe® equipment and improvements.”

Once his Dad, Earl, retired in 1993, Duane became partner in the company and then sole owner in 2018. He then sold a couple of their auger drill rigs and invested in a 7822DT.

After seeing the website videos and literature, they were sold on getting a Geoprobe®. Further solidifying their decision was their clients asking for “Geoprobe®” rather than “direct push.” The name itself was a selling point.

“We call it the ‘Swiss Army Knife’. Multipurpose — good for direct push, auger, rock coring,” Reichel said. “All of our other auger drills have 8,000 to 14,000 lbf of torque, with the exception of the skid rig which has less than 2,000 lbf of torque. I was looking for something with torque in between those two ranges. I wanted to have a wide range of capabilities in our fleet.”

A lot of their geotechnical and environmental work in Madison and southern Wisconsin has been in developed areas or house additions or new houses on lakefront parcels where there is limited access or limited heights.

“We bought a small skid rig before the 7822DT for working in limited heights, and we are able to use the 7822DT in most areas that the other small rig can go, but we appreciate the higher torque on the 7822DT,” Reichel said. “It’s nice to have a smaller profile. We can adjust the height of the mast for ceilings, power lines, or tree canopy. It’s easier to use the smaller profile rig when doing an auger or rotary boring next to a building rather than struggling to jockey a larger rig into tight spaces or have to locate the boring somewhere other than where the client wants it.”

Reichel admits there was an adjustment period, but the benefits are great.

“There’s a learning curve for us going from purely auger drills to Geoprobe®. It’s a different set up, but nicer. We can angle the mast to get tooling vertical or adjust the tower to compensate to maintain a vertical hole or to work with a hole that is a bit off vertical,” Reichel said. “The engine RPM changes according to demand, making the rig quieter since it’s not always running full bore. Combined with the rig engine being smaller than an auger rig, we’re saving on fuel costs for operating and transporting it.”

Having had previous direct push experience using another manufacturer’s rig and tooling, Reichel can clearly see the benefits of the combination 7822DT.

“The other rig and tooling was doing the job but not as efficiently. With Geoprobe® it’s all inclusive — from tooling to rig — so it’s thought out multiple ways,” Reichel said. “There’s not a lot to find to complain about. If there are issues with tooling or the rig, the engineering team is willing to look at things and rectify the issue.”

They appreciate having a single rig to do multiple things — coring concrete, mud rotary, rock coring, and direct-push environmental sampling and upgraded to do CPT work — and all the places they can use it.

“We can go offroad quite a bit. We don’t have to use as much matting as we would with our truck rig or even our low-pressure rubber tire rigs,” Reichel said.

When drilling at existing houses where they have failing slopes or where the lake shore property has erosion, they aren’t damaging existing lawns.

“We were able to get to sites where we wouldn’t have been able to with our larger rigs,” Reichel said. “We can sneak in between houses without other equipment, as we would with our skid rig, since the 7822DT is self-contained.”

A recent job took them inside to investigate proposed improvements to the south end zone seating for the University of Wisconsin-Madison Camp Randall stadium. They drilled soil borings below the bleacher seating in the concession area. The footprint of the 7822DT meant they could handle the sloping ceiling above to get the rig closer to the wall with more working height. The rubber tracks meant they weren’t marking up the concrete, and because the rig is self-contained, they didn’t have a lot of engine exhaust or noise.

“We wouldn’t have been able to do the geotechnical sampling if we hadn’t had the 7822DT. We mud rotary drilled the borings to allow the use of a pressure meter for testing the soils for soil bearing capacity and settlement,” Reichel said. “Our other auger drills are wider and longer than the 7822DT, and they would have been more difficult to maneuver in the concession area. The 7822DT allows us to turn in place and to get closer to obstructions.”

This is just one example of how the versatility and accessibility of the 7822DT has helped Soils and Engineering expand their market.

“We are able to go after more jobs than before or don’t have to subcontract some drilling because we can’t get on site. We’re looking forward to seeing what other challenges we can put the rig up to,” Reichel said. “We haven’t been on a barge yet with the 7822DT. But the lightweight and small footprint means we won’t need as big a barge versus a conventional drill rig, yet we still have direct push, augering and rotary capabilities in a smaller footprint.”