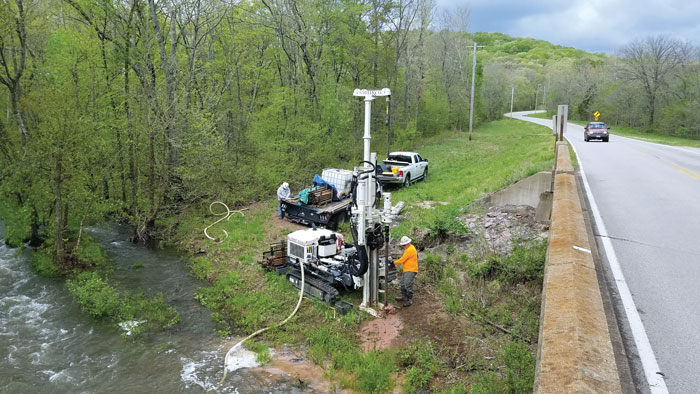 Rock coring for geotechnical shallow foundation and bridge investigations poses no problems for the 7822DT.

“We should have done this years ago!” Mike Walker, operations manager, said.

“There’s been a shift in the environmental field standards where Geoprobe® has really become the standard versus auger rigs. Stakeholders are now wanting wells under gas station canopies or between structures,” Heather Slayton, geologist, said. “As far as the science goes, it’s better for wells to be closer to the source areas. Auger rig limitations used to be accepted but not anymore.”

Doing much of their work in the Mississippi Embayment, they often encounter large amounts of sands and gravels. When combined with shallow groundwater it has always been difficult (if not impossible) to get soil samples from the saturated zones with their auger rigs according to Walker. With their Geoprobe® 7822DT and Macro Core® sampler system, they’ve resolved those issues.

“During my 21 years in the industry, the big gripe was we couldn’t collect samples in saturated soils due to lots of sands and gravel. The Macro Core® sampler allows us to get samples in this zone,” Walker said. “Before we would be lucky to get 20 percent recovery of saturated zone samples back."

Seeking one rig to do more things — environmental, direct push, rock coring, and geotech SPT — they’ve put the rig to the test and been impressed.

“We do a lot of gas station contamination investigations and can do deep water sampling with SP16 – where we couldn’t before with our auger rig — without sacrificing other services,” Slayton said.

During a deep water investigation at a service station in Lilbourn, Missouri, they completed a job with the 7822DT they would have previously subbed out or not even done.

“We groundwater sampled every 4 feet to 130 feet, advanced 14 soil borings in yards and roads, and installed a monitoring well with augers. The 7822DT did it all,” Slayton said. “We beat the proposed timeline for groundwater investigation by five hours. Everyone was happy about that.”

The tracks and small footprint also mean they’re not tearing up adjacent properties.

“It’s opened up doors with property owners. It’s easier to get property access because it’s not as intimidating,” Slayton said. “It’s easy to get in and out without damaging yards.”

What has surprised them is the ease with which the 7822DT tackles rock coring.

“We do a lot of geotechnical shallow foundation and bridge investigations. The 7822DT has really exceeded our expectations because we didn’t expect it to be so multiuse — we can SPT to rock and switch to rock coring. The rock coring capabilities have blown us away at how well it works,” Walker said. “We didn’t realize it had wireline rock coring capabilities. We thought it was just a direct push, environmental auger rig. The 7822DT is a one-stop-shop.”

Their business has benefitted, making operations cheaper without an extra field truck and allowing for multiple capabilities within one mobilization. Having a single rig to do a broader range of things while using Geoprobe® tooling has also improved production.

“The 7822DT has allowed us to be far more efficient than when using bigger rigs. We’re able to shrink our fleet on site,” Walker said. “We can soil sample faster with dual tube and Macro Core® sampler, which has increased our productivity.”

And leveraging the combination drill rig with genuine Geoprobe® tooling means they can advance multiple samples and get on with well installation, which pleases everyone involved.

“Other manufacturers’ tooling is temperamental. Geoprobe® tooling is better manufactured, goes together better,” Slayton said. “The driller spends less time fighting with the equipment, which makes him happier.”

Rock coring for geotechnical shallow foundation and bridge investigations poses no problems for the 7822DT.