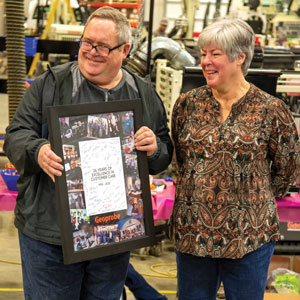 Since Jan. 10, Greg Johnson, international sales representative, has been focusing his time on ministry within the community, missions with the Haven of Hope school and medical facility in Nigeria, and family — including 10 grandchildren. Their favorite retreat is the 40 acres, including pond, that has been in his family since his Great Grandfather moved from Sweden in 1885. Greg’s sense of humor is evident in the signs around his property, including one near the sauna stating “from this point clothing is optional…”

“What are you going to do in Salina, Kansas, to support five kids,” his father asked.

“You are a dinosaur in your field. You learned electronics back when there were vacuum tubes.” Greg replied, “Dad, don’t you think God can provide?”

Upon return to the states, he and wife Rebecca purchased an old home in which Greg was refinishing the dining room floor. One day while driving in search of polyurethane, he stopped to visit an old friend. During their conversation, which included mention of looking for work, his friend suggested “you should see the guys at Geoprobe®, they’d be a good fit for you.”

After purchasing the polyurethane Greg proceeded home, but upon seeing the Geoprobe® facilities, pulled in completely unannounced and introduced himself to Tom Christy and Mel Kejr.

“Mel dropped everything he was doing to take me on a tour of the facilities. After visiting with Tom and Mel for awhile they said, ‘don’t look for a job, you’ve got one’,” Greg said.

He began in 1993 as shipping manager. During the next eight years, as individuals left, he gradually took on international sales, which at the time were focused in Japan and Korea. Adding European sales was a natural fit for Greg. Eventually he would no longer be torn between multiple roles, but could focus on international sales full time. During his tenure he built a network of in-country international representatives, preferred by customers due to the close proximity, cultural awareness, and shared language.

After 26 years, he leaves a legacy of treating customers with honesty and respect and raising the profile of international customers within the company. The relationships he’s built with clients have resulted in their signing farewell letters with “your friend,” not just “your colleague.”