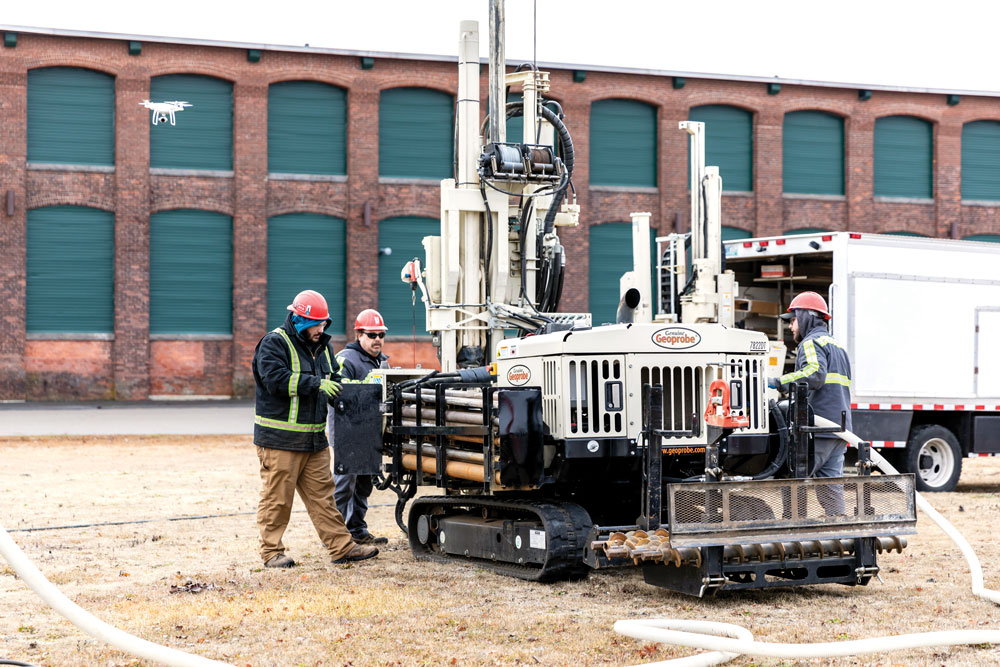 With scheduling busy drillers becoming increasingly difficult in the Northeast, affecting their clients, SAGE Environmental recognized the need to control its environmental, remedial injection, and geotechnical drilling services. SAGE also recognized they could provide added-value by enabling their in-house science, remedial, and geotechnical staff to further develop and educate their drillers to be more aware of their clients particular needs.

Having overseen drilling for decades SAGE staff was familiar with Geoprobe®, making it a natural choice. A second generation driller, underutilized at another firm, got wind SAGE was considering starting a drilling business and the rest is history. In 2017 EnviroTech Drilling Services was created.

“We started the business with a brand new, state-of-the-art 7822DT track rig with all the bells and whistles to enable us to offer geotechnical, environmental, and remedial services our clients were clamoring for,” John Clark, general manager, said.
In the three years since launching the business, EnviroTech has developed two Master Drillers and two apprentices. They've also added a “like-new” refurbished Geoprobe® 6600 with automatic drop hammer and a new 540MT for drilling and injecting in low-clearance areas.

“We’ve been somewhat surprised by the volume of geotechnical work demanded by our engineering and construction clients,” Clark said. “We needed to gain speed and efficiency in geotechnical drilling to have advantage over others so we could do more in a given day.”

Clark called Vic Rotonda, Geoprobe® regional sales representative, who described out-the-end (OTE) sampling as a means to gain these geotechnical drilling efficiencies. The EnviroTech drilling team saddled up and drove to New Jersey to complete an intensive training with Vic and the OTE and dual tube sampling tooling and techniques.

“Under certain soil conditions it (OTE and dual tube) can be twice as fast as drive and wash,” Clark said. “Twice as much data. Twice as many borings. Twice as much vertical feet in a day, putting us on par with traditional auger rigs and then some.”

Using OTE sampling proved especially beneficial for a client who was aware of EnviroTech’s new tooling. The client had been using conventional auger rigs to sample a gravel bank on a large tract of land to analyze the type of material in the soils. With the OTE sampling, they were able to do twice as much work as other contractors. The client quickly recognized these benefits and had EnviroTech analyze the entire gravel bank rather than just the portion originally contracted.

“Using OTE allowed us to complete nearly a year’s worth of work in a week,” Clark said. “It opened up a fantastic business advantage over others not using the method. Part of our challenge is to educate the geotechnical engineering community about the speed, efficiency, and flexibility provided by the modern Geoprobe® rigs.”

“The spring assisted swivel lift cap accelerates how quickly we can switch out rods. They’re intuitive, my guys love them,” said 30-plus year and second generation Master Driller Steve Perry. “And we love the new design of the split spoons. They quickly open and close where traditional spoons get harder to put back together as they age. They’re less finicky than traditional spoons. The new design is more tolerant of residual left on the spoon.”

Along with the machinery and tooling, the “top-notch” support received from Geoprobe® contributes to the company's success.

“I can pick up the phone, and whether it’s Vic or a tech assistant from headquarters, anyone can call and get very descriptive, quick answers. If we’re out at a site and need assistance, we can call and get immediate answers and get parts overnight shipped for next day,” Perry said. “Our partnership with Geoprobe® and its support staff have enabled us to consistently WOW our clients…and what could be better than that!”