The Optical Imaging Profiler (OIP) is a new direct push photo-logging system developed by Geoprobe® that uses a down hole light source and Complementary Metal-Oxide Semiconductor (CMOS) camera to investigate for fluorescent contaminants through a sapphire window on the side of the probe.

Of course, this probe is for use in soils and unconsolidated formations.  The OIP probe was initially developed with an ultraviolet (UV/275nanometer) light emitting diode (LED) for the detection of fuel fluorescence.  Several common organic contaminants of concern (coal tars, creosote, bunker fuels) yield inconsistent results under UV light but do fluoresce under green wavelength light.  Therefore, Geoprobe® has developed an OIP probe with a green wavelength (525nm) light source (OIP-G).

The downhole camera acquires images of fluorescence at 30 frames per second that are displayed onscreen while logging.  The images are analyzed for the percent area of fluorescence (%AF) by a 2-stage digital filter in the OIP software, and one image every 0.05ft (~15mm) is saved to the log file.  If there is no fluorescence, the images are dark.

The OIP-G probe includes a dipole electrical conductivity (EC) array for the measurement of bulk formation EC.  The EC and %AF logs are displayed onscreen along with the images of fluorescence as the probe is advanced at approximately 2cm/sec by a Geoprobe® unit.  We recommend a drive cushion (MN 221775 for GH60 hammer) be used between the hammer and drive cap to optimize probe life.

Geoprobe® coordinated with Gary Richards and Jonathan Stephenson at the Kansas Department of Health & Environment (KDHE) and their contractor GSI Engineering of Wichita, KS, to conduct a test of the OIP-G system at the former manufactured gas plant in Wellington, KS.

The site is underlain by clay rich alluvium with silty to sandy interbeds to a depth of about 30 ft. with Permian Age shale as the bedrock.  We completed OIP-G logs at 39 locations to depths of up to 33 ft. A log from location KD04 at the Wellington site (shown below) lets you see how a typical OIP-G log looks along with an image showing significant fluorescence.  The logs revealed the presence of significant fluorescence at several locations and depths.  Sampling was performed at selected locations and targeted depths based on the fluorescence logs.  The samples collected with the DT22 soil coring system were submitted for analysis of polynuclear aromatic hydrocarbons (PAH).  Lab analyses revealed the presence of elevated PAH concentrations in most samples.

Importantly, sampling revealed that false positive results (up to 40%AF) were detected at a few locations.  Bench tests with dilute hydrochloric acid revealed that these false positive results occurred due to the presence of calcareous minerals.  The fluorescence of calcite is well documented.  Inspection of the targeted core samples quickly verified the presence of coal tars or calcareous sediments or caliche nodules.

Following field work, cross sections with EC and %AF logs helped to define the presence and distribution of coal tars in the subsurface and identify preferential migration pathways. These results indicate that the OIP-G system will be a useful tool for investigation of coal tar contaminated facilities. 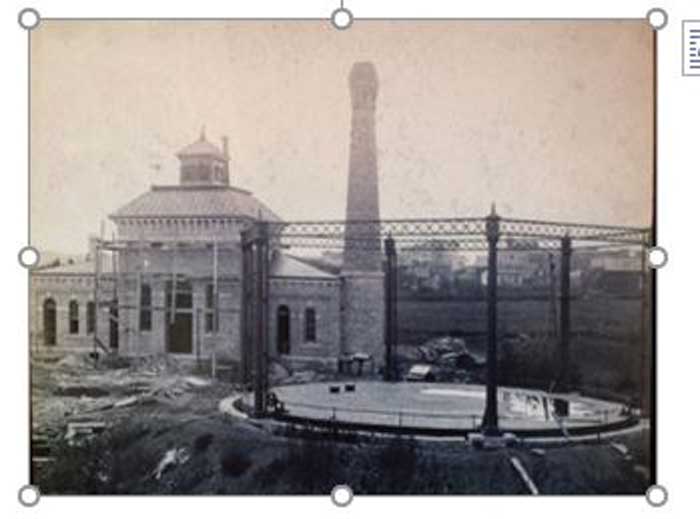 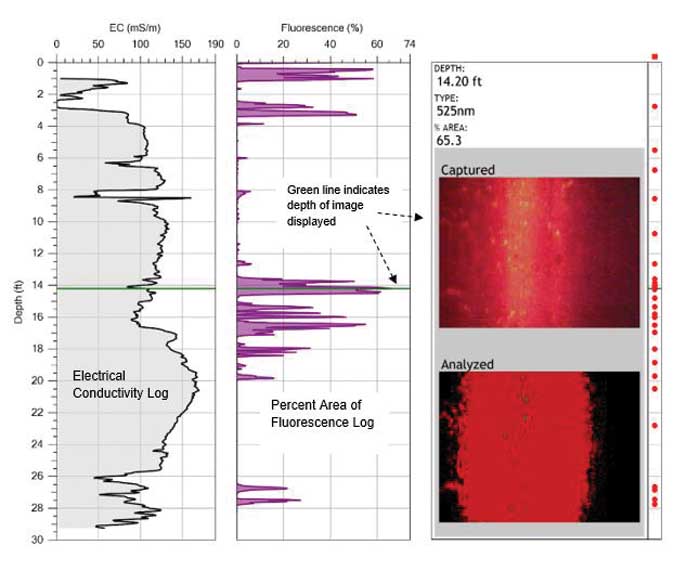 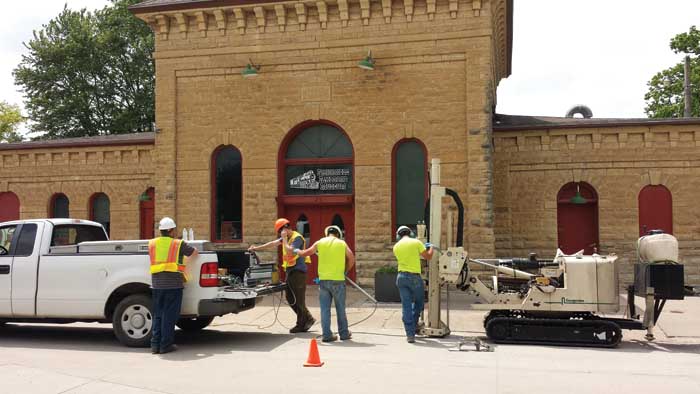 The Wellington, KS, Manufactured Gas Plant (MGP) under construction circa 1886. Note the gas holder in the right foreground. It was destroyed and backfilled after the plant closed.

An OIP-G log from the Wellington, KS, former manufactured gas plant (MGP), location KD04. The captured image shows the fluorescent light given off by the coal tars at the indicated depth in the formation. The analyzed image depicts the area of fluorescence that passes the 2-stage digital filter in the software to be classified as contaminant fluorescence. The % Area of fluorescence for this particular image was determined to be 63.5% by the software.

Members of GSI Engineering of Wichita, KS, and the Kansas Department of Health & Environment (KDHE) run an OIP-G log in front of the former Manufactured Gas Plant (MGP) building in Wellington, KS, which has been converted to a railroad museum.