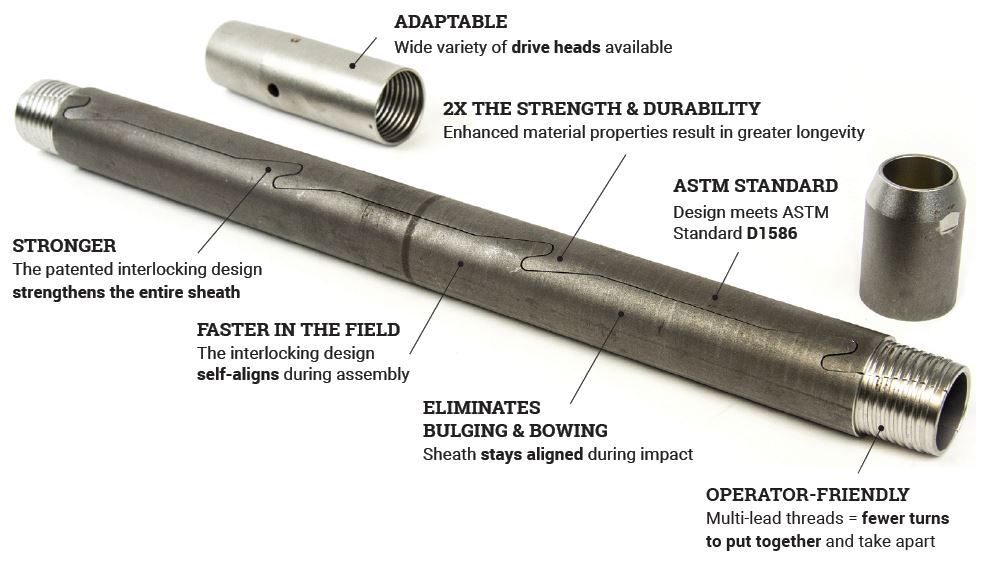 Engineered and built by Geoprobe®, our patented interlocking split spoon saves drillers both time and money.  Our interlocking split spoon is 2X stronger, lasts longer, and is operator-friendly with fewer turns to put together and take apart thanks to multi-lead threads.  It joins the ranks Genuine Geoprobe® products, such as the Macro-Core® and Dual Tube soil sampling systems, and our Screen Point groundwater samplers.  It’s one more example of our Engineering team’s efforts to think outside the box and provide the best possible soil probing and drilling equipment available.

“We have about 2,000 feet of drilling on each spoon and we haven’t changed any of the shoes yet, which shocks me.  Most traditional split spoons spread apart if you have too much material or you’re in sands and gravels.  These do not spread apart when you’re pulling them out of the hole.  We haven’t had a spread split spoon since we started running them.  They’ve held up, haven’t mushroomed out, they go together easy, and come apart easy.  We have a lot of weathered rock here and usually before we start coring we complete two or three 50 overs.  So, they’re getting a beating and they’re handling it very well. I’ve been very impressed with them.”

“We’re quite pleased with it.  Timewise it’s a lot quicker. It goes together fast and aligns closely.  Sometimes you have a little debris in there, so you might have to tap it, but it’s not like the traditional split spoons where you literally have to beat the two pieces together.  Sampling in hard shales the traditional split spoon bows out in the middle but our Geoprobe® spoon holds its shape.  The way it interlocks keeps it from bulging out in the middle.  It’s nice having the threads on both ends for the (cutting) shoe and top end (drive head).  The old school spoons you had to do it a certain way, put the shoe on first and then the back, and the old version doesn’t seem to line up as good.”