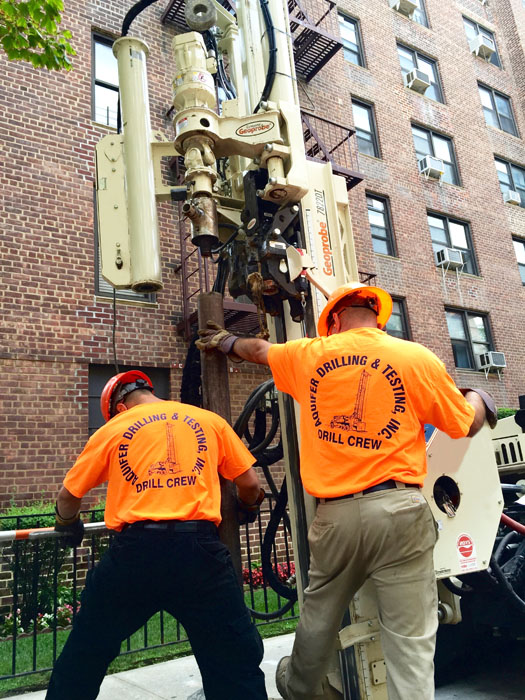 James Corsitto (left), Helper, and Chris Migliore, Driller, run the ADT 7822DT rig. ADT has outfitted their 7822DT with a Side Port Swivel so they can quickly switch from direct push to wet rotary.

Aquifer Drilling & Testing, Inc. (ADT) is currently operating between 8-12 crews gathering information to help design bioswales throughout the five boroughs of New York City as part of the City’s Green Infrastructure Plan which was developed to better manage stormwater runoff.

New York City, like other older urban centers, is largely serviced by a combined sewer system where stormwater and wastewater are carried through the same pipes. Even though wastewater treatment plants (WWTPs) are designed to treat and disinfect twice dry weather flow, during heavy storms the system can exceed its capacity. When this happens, the system is designed to discharge a mix of stormwater and wastewater – called combined sewer overflow or CSO – into New York Harbor in order to prevent damage to wastewater treatment plants.

One of the problems ADT encountered early on was being able to set up on locations with limited access.  Bill Poupis, Vice President and General Manager for ADT explained: “Parked cars, trees, narrow sidewalks, all posed problems for truck- and even track-mounted drill rigs. Gathering information such as blow counts and soil permeability required employing ‘Drive & Wash’ technology to drill at these locations.”  Because of this, ADT modified two of its Geoprobe® 6620DT units with auto hammers and mud swivels allowing them to drive 4-inch casing into the ground while collecting split spoon samples for blow count information. Moving over at the same location, 4-inch casing was driven into the ground at two different depths to perform permeability testing.

“With the recent purchase of four new 7822DTs,” Bill added, “we’re able to utilize up to six Geoprobe® crews for this bioswale project enabling faster and easier access to locations that previously required the coordination of blocking parking spots to allow drill rig access.”

ADT has provided environmental and geotechnical site services for over 25 years. “Our goal,” Bill added, “is to provide our clients with the highest level of service in a safe and cost-effective manner.”

“We’ve been able to increase our production by almost 50 percent using the Geoprobe 7822DT’s outfitted for ‘Drive and Wash’ drilling.  Parked cars, trees, fire hydrants, light poles and narrow sidewalks are easily navigated with these track units. Our crews love them and our clients request them!” 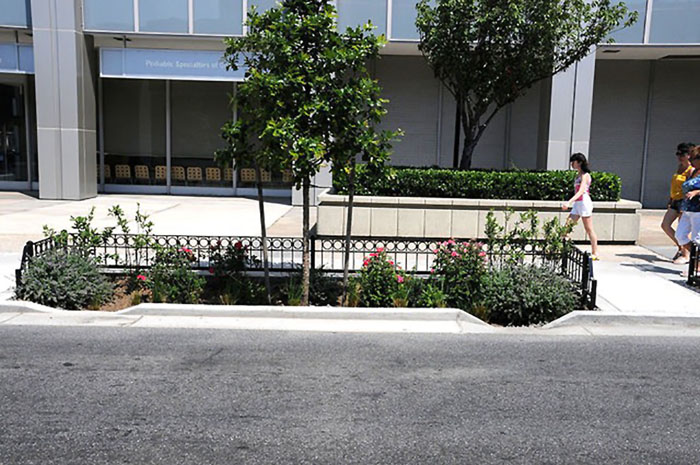 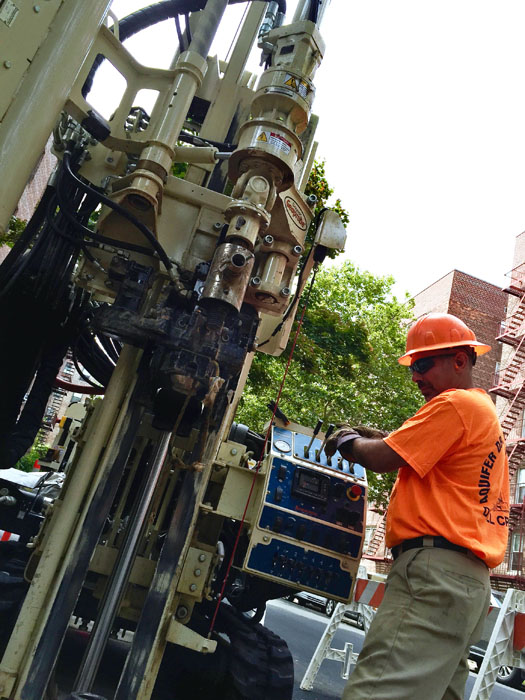 James Corsitto (left), Helper, and Chris Migliore, Driller, run the ADT 7822DT rig. ADT has outfitted their 7822DT with a Side Port Swivel so they can quickly switch from direct push to wet rotary.

A completed bioswale in New York City. These green gardens ... bioswales ... consist of deep, wide vegetation pits cut into sidewalks and filled with soil and horticulture designed to absorb stormwater. New York City’s antiquated combined sewer system is often overwhelmed by rains that dump billions of gallons of untreated sewage into the city’s waterways every year.

ADT added four new Geoprobe® 7822DTs to their fleet for the NYC Green Infrastructure Plan because of their compact size and easy maneuverability.Chris Migliore, ADT Driller, is at the controls of this rig.