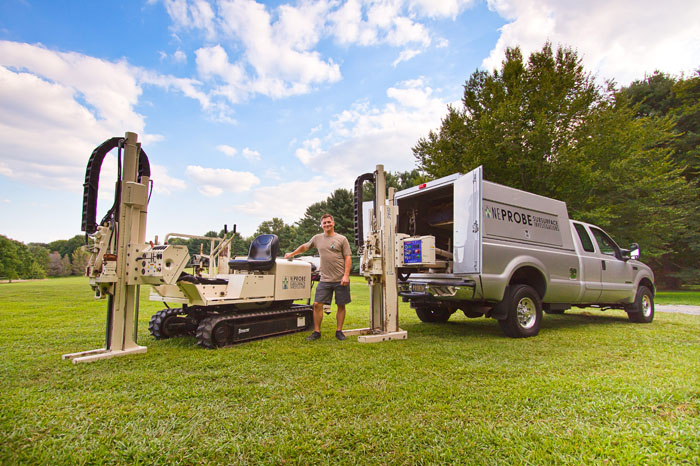 Rob McAllister, Owner of Northeast Probe in Newark, DE, has been a one-man company since he started his business in 1996. And his Geoprobe® ‘fleet’, a 54DT (left) and 5410, have helped him serve his customers well. Rob celebrates his 20th year in business with the purchase of a new 5410 to replace the one pictured above.

As a young man out of high school, Rob McAllister wasn’t sure what he wanted to do with his life. That’s something a lot of people can relate to. So when something sparks your interest and makes you feel good, you just roll with it to see where it takes you. And maybe, with a lot of hard work and dedication, you can experience the ‘American Dream’. In a nutshell, that’s what happened to Rob.

His interests were outdoorsy-type activities. He was the neighborhood lawn boy, and didn’t mind getting his hands dirty, but never thought of a career working outdoors. He went to trade school to become an electronics technician like his father, but quickly lost interest. “I sold my possessions and traveled around the country in an old Ford pickup with a friend,” Rob said. “When the truck ran out of gas I was in Eugene, OR, with no money and no job!”  A short stint in a sawmill got him enough cash to get home. Back in Delaware, his sister got him a job at a bank. He said there were lots of great people to work with … but sitting in a cubicle with a phone attached to his head wasn’t his idea of fun!

In 1993, a friend told Rob about a job opening for ‘environmental work’. “I didn’t know what that was,” Rob said, “but figured I’d give it a chance.” Dave Colegrove (remember him from early Geoprobe® days?) was looking for a technician to run a machine called a ‘Geoprobe®’. Dave wanted someone that liked to work, didn’t mind a little travel, and would show up on time. At 20 years old, Rob certainly had nothing to lose. He said it turned out to be “exciting…and fun…and interesting!“ Rob stayed for a couple of years and built up some experience and a clientele.

One day, someone asked him, “Why don’t you just get a rig and go out on your own?”  Lightbulb!  It seemed like a crazy idea, but it left a knot in his gut that wouldn’t go away, and this is where his story really begins.

It was 1996. He was 23 years old and $80,000 in debt with no work. He was determined to make it happen. He purchased a used Geoprobe® 5400 truck rig and a set of 1-in. tools, mostly with borrowed money and credit. Rob made postcards on the computer and sent them to environmental consultanting companies all down the east coast advertising his business. After about three months, he got his first job in Washington, D.C. “It was a simple day of Macro-Core® soil collection,” Rob recalled, “but I remember how proud I felt on the drive home.” After that the phone started ringing. He took jobs from New England to Florida…whatever was necessary to pay the bills. Word spread and business was good. After about three years, he was completely out of debt, and his little company was running like a well-oiled machine.  Tooling was getting better, more versatile, and he was taking on bigger projects and expanding his business with injection work and monitoring well installations.

In 2002, Rob purchased a new truck rig. Geoprobe® was producing the 5410, and Ford’s Powerstroke was at its pinnacle with the 7.3 L engine. He eventually bought a 54DT, in addition to the truck rig, and has never slowed down with these smaller direct push machines.

Rob shared that his exit strategy from field work begins around age 50, so the idea of buying new equipment at this stage of his career was a tough decision. “I believe a new machine will make life easier for my remaining time,” he said. So in August, he purchased a new 5410 to replace his 2002 rig. With Geoprobe Systems® offering such a variety of machines, he was asked, “why another 5410?”. Rob responded, “Well, it’s a workhorse. It’s not all-terrain, but it has 4-wheel drive. It’s entirely enclosed, and carries everything needed for a job, and at the same time pulls a trailer with my 54DT. It has the static weight advantage for pushing. Height is not a big issue, and four-foot tooling is very manageable. The water system is insulated for winter, and most importantly – it has air conditioning and it looks good!  Sometimes ‘old-school’ just works!”

For Rob, the 5410 has not lost it’s luster … “It’s still very useful and profitable. Sometimes you just don’t mess with a good thing, and if that means keeping things simple, then so be it!” Rob has remained a one-man company since the beginning, and 2015 marked NE Probe’s 20th year serving the environmental consulting industry. Rob said his customers that have kept him going all these years have helped make this business fun and successful. “Many of them have been faithful to me since 1996,” he said. “It’s these people, and many more, that keep me busy, and we enjoy doing what we do best.”

Wikipedia states, “The American Dream is a national ethos of the United States, a set of ideals in which freedom includes the opportunity for prosperity and success, and an upward social mobility for the family and children, achieved through hard work in a society with few barriers.” When Rob looks back on his career and to his future, he feels proud. “I’m grateful for the opportunities that Geoprobe® and this country have afforded me. I’ve been blessed with a beautiful family, a comfortable home, and a job where I’m my own boss,” he added. “I truly believe my experience has been the American Dream.”

“I am grateful for the opportunities that the Geoprobe® and this country, have afforded me. I’ve been blessed with a beautiful family, a comfortable home, and a job where I’m my own boss. I truly believe my experience has been the American Dream.” 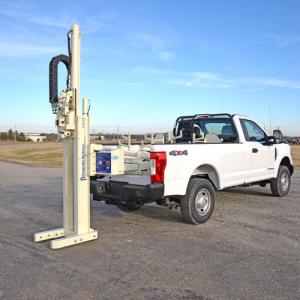 Complete small to medium direct push jobs with probe and tools transported in a single rig with the 5410 truck mounted drill rig. 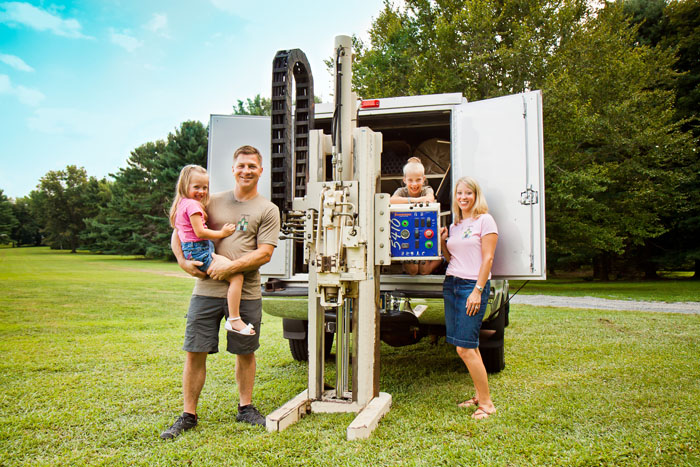 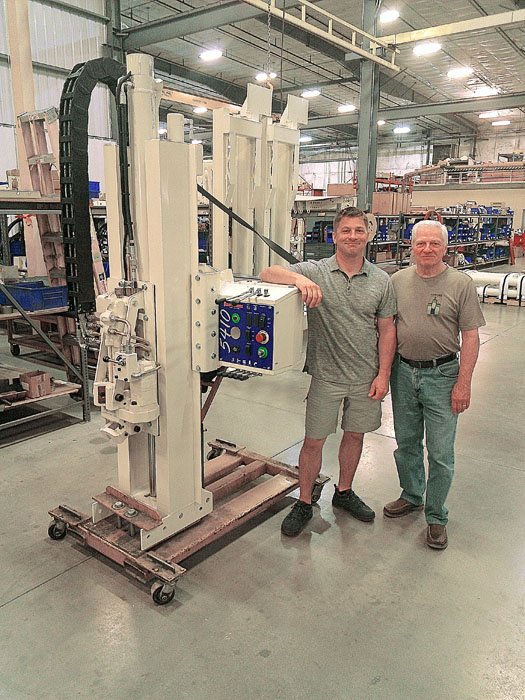 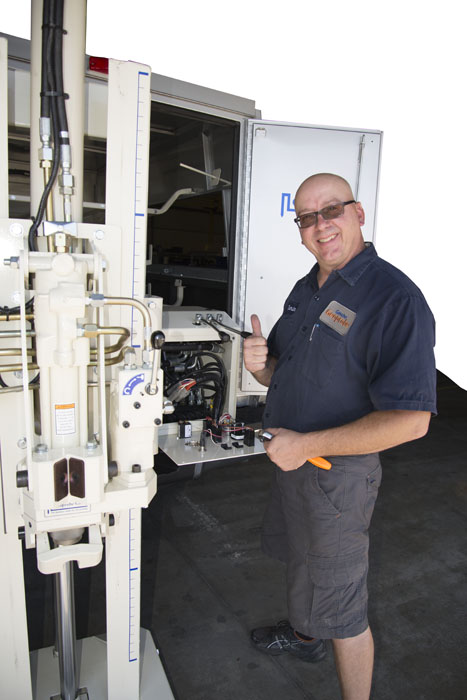 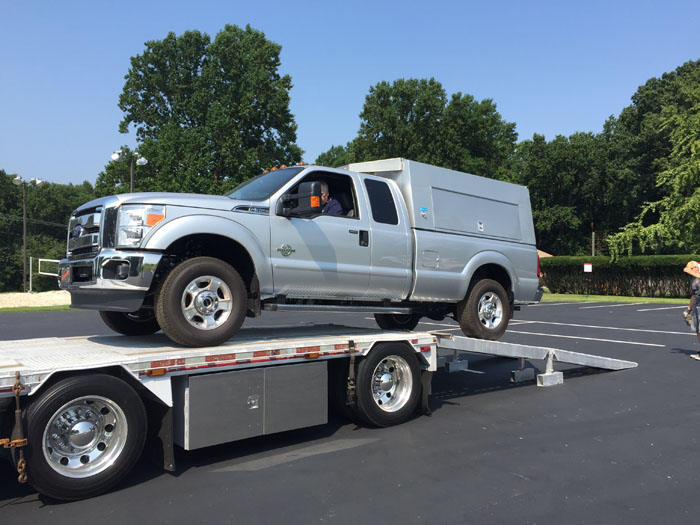 Rob McAllister, Owner of Northeast Probe in Newark, DE, has been a one-man company since he started his business in 1996. And his Geoprobe® ‘fleet’, a 54DT (left) and 5410, have helped him serve his customers well. Rob celebrates his 20th year in business with the purchase of a new 5410 to replace the one pictured above.

Rob and his father, Bob McAllister, spend some get-acquainted time in Geoprobe® Assembly with the new 5410 unit that will be installed in Rob’s new Silver Ford F350.

Darin Garmin, Geoprobe® Assembly Technician, puts the finishing touches on Rob’s 5410 before it heads to Delaware.

Victor Rotonda, Geoprobe® Sales, unloads Rob’s new 5410 from the transport truck in Delaware. According to Vic, “Rob has enjoyed much success in his business because he truly cares about his clients. Rob’s name in the industry is synonymous with reliability.” 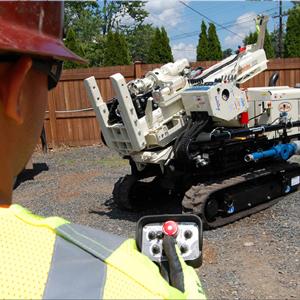