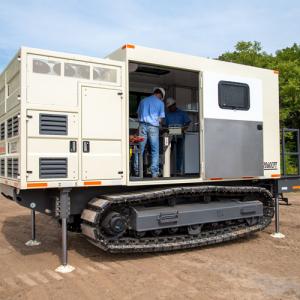 The 2060CPT is a 20 ton rated static push Cone Penetration Testing platform from Geoprobe®. It is commonly used to push CPT tooling for soil strength testing in geotechnical applications. The added flexibility of the optional 6712DT mast allows for additional machine applications.

The rig features 20 tons of downforce and 30 tons of pull. With a push through center of gravity, the weight is evenly distributed over the entire platform. The weight of the entire cabin crawler is centered at the press clamp so that the entire mass of the crawler is applied to the tool string being advanced.

The robust track system of the 142-horsepower Geoprobe® 2060CPT allows for CPT testing in most terrains. It’s proven drive-train and chassis provide excellent climbing and turning ability. With a ground pressure of 7 psi, it causes minimal disturbance to the terrain with minimal ground pressure at the tracks. The rig is tracked to the testing location with either a wireless or tethered remote.

The climate controlled cabin has a large side door that allows for easy loading and unloading of rods and equipment. During setup, four hydraulic outriggers are used for leveling the machine.

Optional shear wave generators are used to generate a shear wave impact for sensing measurement by the Seismic Cone Penetrometer. They provide a sharp, swift hammer strike, producing a clean energy wave through the soil for the cone to read.

The compact, user friendly control panel allows for all functions and hydraulic controls to be controlled from one location. It features a swing arm, allowing for control from either side of the press.

The hydraulic push clamp and press can push the cone with up to 20 tons of downforce. The amount of force can be adjusted on the control panel. A camera is mounted to the undercarriage for precise location of the machine over the hole. Internal monitors allow for viewing the camera as well as logging information. A hydraulic bottom clamp is used to keep rods from slipping back down hole when the push clamp is released. When retracting the tool string, the 2060CPT has 30 tons of pull.

An optional 6712DT mast can be mounted on to the porch side of the 2060CPT. This allows for coring, conventional soil sampling, shallow drilling for soil verification, and pre-drilling. In many cases, it may be required to create a hole opening for CPT by clearing concrete or debris. The 6712DT mast opens up these options on one rig. It is located in-line with the CPT press inside the cabin. The crawler can easily be tracked over the drilled hole when the time comes to perform the CPT test.

Outside of CPT testing, the press can be used with other logging systems including the membrane interface probe, hydraulic profiling tool, optical image profiler, and a combination of CPT and other logging tools.