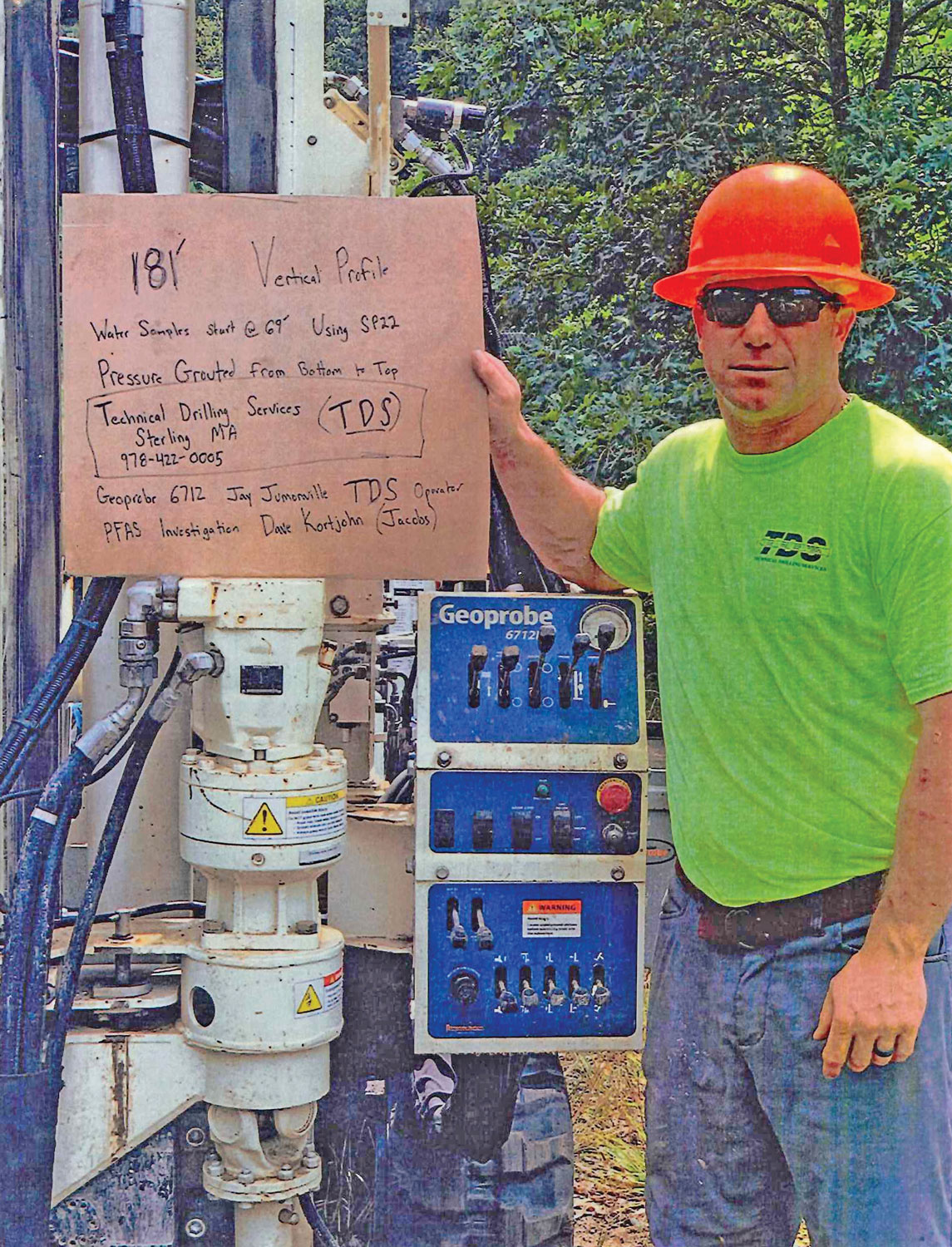 One of numerous holes deeper than 100 feet, a 181-foot vertical profile using SP22 pushed with a 6712DT during the PFAS water testing project.

In 1992 — three years after starting their business — Technical Drilling Services became one of the first engineering companies in New England to purchase a Geoprobe®.

“We made a huge leap of faith to buy the Geoprobe® — not yet proven in the glacial till of New England. Contemporaries were laughing at me,” Mark Zork, president, said. “Thirty years later if you don’t have a Geoprobe® in your arsenal you’ll be missing out.”

Now with seven Geoprobe® rigs ranging from 420M to 7822DT with coring capabilities, they use smaller rigs for niche stuff inside buildings and larger rigs on big direct push projects. For two years they used a 7822DT and a 6712DT exclusively on a PFAS water testing investigation at the former Fort Devens Army Base in Massachusetts, which is now used as a commercial/industrial center.

“The site has a highly permeable soil with a deep water table. Past use of the property contaminated hundreds of acres with PFAS. They filled lagoons with diesel fuel, lighting them to practice putting out jet fuel fires with retardants containing PFAS,” Zork said. “The highly permeable soil conditions caused the contamination impact. There’s concern whether the two or three municipal well supplies adjacent to this facility have been impacted.”

“We kept finding PFAS so they kept adding change orders to expand the area sampled until we had peppered the base with groundwater profiling,” Zork said.

During the PFAS water testing project they conducted numerous holes to more than 100 feet, including a 181-foot vertical profile using SP22.

According to Zork, the Environmental Protection Agency, local Massachusetts Department of Environmental Protection, along with the Army Corps of Engineers collaborated on the scope of work. After the agencies had tried sonic — which achieved depths quickly but struggled sampling to the point they didn’t trust the results — they revised the work plan to direct push using SP16. However, Zork experienced challenges with the 1.5-inch rods in the soft soil.

“We would bend a string of rods 100-foot long, looking like a corkscrew when we pulled them out. The rods would be straight for 50 feet and then bend without an indication in hammer production we’d hit an obstacle,” Zork said. “Because of the soil between 70-150 feet, we wouldn’t know what direction they were going. It got to where I would call Geoprobe® because we’d lost 150 feet of rod and began keeping 300 feet of rod in stock at all times.”

After six months of SP16, the agencies switched the scope of work to SP22 using a heavier rod, which eliminated the rod bending. SP16 and SP22 were specified because of their ability to isolate the sample in a closed system.

“We could go through 100 feet of water with confidence of the discrete nature of the sample, important because the detectable carcinogenic rate is so low you have to be certain there’s no cross contamination,” Zork said. “SP22 handled filtering out fine sediments better than SP16.”

They were required to complete a sampling protocol without injecting another water source into the sample.

That zero tolerance applied to rain water as well.

“If there was heavy rainfall with droplets running off our heads or equipment, they would shut down the site. Not because of the rain but because something we had on or with us would have a chance of cross contamination by dripping into the samples,” Zork said. “We had to document that the sampling equipment didn’t contain PFAS. Because detection levels are so much lower, they had to eliminate any chance we were introducing something that wasn’t in the ground.”

The direct push method and use of SP16 and SP22 were the only way to complete the PFAS water testing project in Zork’s mind.

“The job couldn’t have been done with a conventional machine or other method of drilling. SP16 and SP22 are proven sampling methods,” Zork said. “In most situations the EPA and Army Corps are already educated to how useful these tools are. Geoprobe® has done the right demonstrations for the right people.”

The 7822DT and 6712DT also proved to be the right tools, minimizing downtime on the two-year project to just 10 days – only two due to breakdowns.

“I finally told the client the rigs had been running virtually non-stop for four months and we needed to do regular maintenance on hydraulics and engine oil,” Zork said. “Downtime is the biggest killer in the industry. Geoprobe® has done their homework and the tech support is so far superior. Geoprobe® products may not be cheapest, but being able to depend on them to run is more important.”

Upon completion, Phase I of this PFAS water testing project had ballooned into a $1 million direct push job. The agencies recently contacted Zork to conduct another round of groundwater sampling — 15 profiles to bedrock estimated at 150 to 200 feet, all direct push. The proposed second contract is $200,000.

“We’ve been in business 33 years,” Zork said. “Thirty-three years ago I didn’t even realize if I’d still be in business or if I’d be dead or sipping pina coladas on a beach somewhere.”

One of numerous holes deeper than 100 feet, a 181-foot vertical profile using SP22 pushed with a 6712DT during the PFAS water testing project. 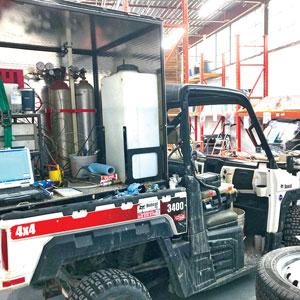